The Cashier's House is a three-story stuccoed-brick, Greek Revival building located on State Street in Erie, Pennsylvania. It was documented by the Historic American Buildings Survey in 1934. The house was listed on the National Register of Historic Places on January 13, 1972, and its boundary was increased on March 9, 1983.

The Cashier's House was designed by Philadelphia-architect William Kelly and was built as part of a three-structure complex, in 1839. The Coach House and Old Custom House were also part of the complex. It was built primarily as the residence for the chief executive officer of the next door Erie Branch of the Bank of the United States. The bank closed in 1841, but the cashier of the bank continued to live in the house until his death in 1843. In 1850, the house was sold for $4,000 ($91.2 thousand in present-day terms) at half of its original cost. The Cashier's House was bought by Samuel Woodruff in 1872. The Woodruffs occupied the Cashier's House until 1913, leading the house to sometimes be referred to as the "Woodruff Residence" or "Woodruff House." 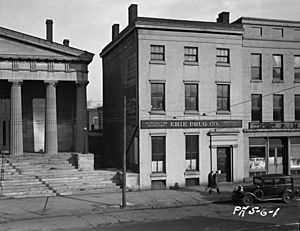 HABS photo of Cashier's House, next to the Old Custom House, in 1934

The Coach House, located on East 4th Street, was built at the same time of the Old Custom House and the Cashier's House. The house was sold to a marble dealer in 1882 and was sold, again, in 1904 to a blacksmith. The depth of the house was expanded to nearly triple the original size by the blacksmith to house heavy machinery.

All content from Kiddle encyclopedia articles (including the article images and facts) can be freely used under Attribution-ShareAlike license, unless stated otherwise. Cite this article:
Cashier's House Facts for Kids. Kiddle Encyclopedia.