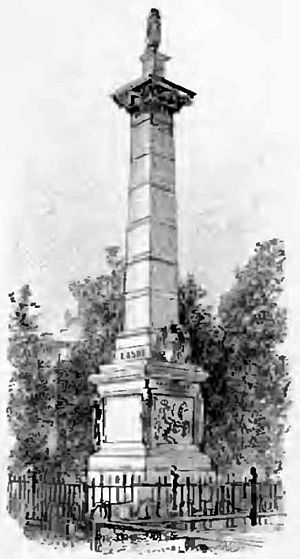 Sources vary with regards to when the cornerstone for the monument was placed, with either 1825 (involving the presence of Gilbert du Motier, Marquis de Lafayette) or 1853 being given. Coulter notes that the Lafayette cornerstone was originally located at Chippewa Square, but the funding proved insufficient to erect the monument at that time, and in 1853 it was moved to the Monterey Square, where the monument would be erected. Construction of the monument at Monterey Square began after funding (approximately $17,000) was finally secured. The cornerstone was relaid on October 11, 1853 (anniversary of Pulaski's death). Nash notes it was unveiled in 1856; Knight, however, notes that the statue was dedicated on January 9, 1855. The monument is said, according to Knight, to have been "considered at the time one of the most elegant memorials in America." Alongside the monument, a body alleged to be Pulaski's was buried in it (recent genetic reexaminations of the body are conclusive that this was Pulaski).

Work on restoration of the monument began in 1995.

The monument is made from Italian marble, with smaller elements of granite. It is 55 feet (17 m) tall. The monument has a bronze bas relief of mounted Pulaski, and is topped with a statue of Liberty, with the stars and stripes banner. The monument was designed by Robert Launitz. The bas relief was designed by Henryk Dmochowski, and shows the moment of Pulaski's death. Additional elements present on the monument include the coat of arms of Poland and the coat of arms of Georgia.

Inscription on the monument reads: "Pulaski, the Heroic Pole, who fell mortally wounded, fighting for American Liberty at the siege of Savannah, October 9, 1779."

All content from Kiddle encyclopedia articles (including the article images and facts) can be freely used under Attribution-ShareAlike license, unless stated otherwise. Cite this article:
Casimir Pulaski Monument (Savannah, Georgia) Facts for Kids. Kiddle Encyclopedia.