Castle Blunden is a historic country house in Kilkenny, home to the Blunden family. 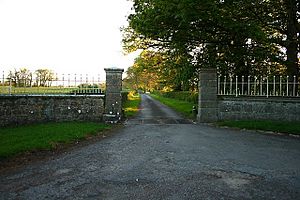 Overington Blunden of Southwark, London was granted lands in Kilkenny in 1667 along with land in Offaly, Waterford and Tipperary. He is listed as a Cromwellian Adventurer and at least some of his lands were taken from the Kilkenny local Shee family. His descendant was the barrister Sir John Blunden, 1st Baronet who built and lived in Castle Blunden. Like his father he was a member of the Irish House of Commons, elected for the constituency of Kilkenny City in 1761. He was made a Baronet on 12 March 1766.It remains the seat of the Blunden baronets with the 8th Baronet Blunden taking over the title on 9 April 2007 though he had to wait until 2017 to take over the house itself.

All content from Kiddle encyclopedia articles (including the article images and facts) can be freely used under Attribution-ShareAlike license, unless stated otherwise. Cite this article:
Castle Blunden Facts for Kids. Kiddle Encyclopedia.