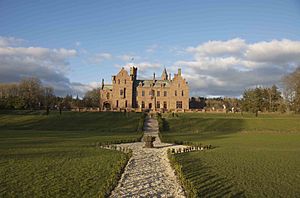 Castle Oliver (also Clonodfoy) is a Victorian castle in the south part of County Limerick, Ireland. Built for entertaining rather than for defense, it has a ballroom, drawing room, library, morning room, dining room and hall which feature hand-painted ceilings, decorated ornamental corbels, superbly executed stained glass windows and stencil work. The castle stands on massive terraces and has a commanding view over much of its former 20,000-acre (81 km2) estate. The castle has Ireland's largest wine cellar, said to hold approximately 55,000 bottles. From May to September 2014, Castle Oliver was opened to the public in conjunction with "Limerick City of Culture" for house tours.

The lands where the castle stands were settled in about 1658 by Capt. Robert Oliver, one of Oliver Cromwell's soldiers. The present castle replaced the former Castle Oliver, which stood a thousand yards to the south-west and was the birthplace of Eliza Oliver, mother of the notorious Lola Montez, who became the lover and favourite of King Ludwig I of Bavaria. 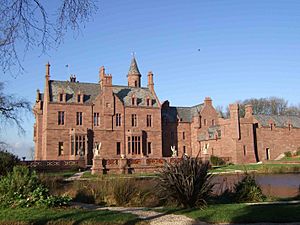 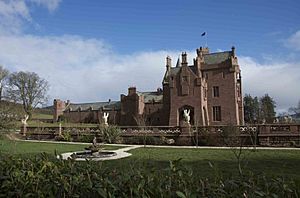 The castle was for many years known as Clonodfoy, a contraction of an earlier Irish place name: Cloch an Otbhaidhigh, meaning 'the stone structure of Otway', Otway being an Anglo-Norman family name.

Capt. Robert Oliver's descendant Richard Oliver married a Yorkshire heiress through whom he inherited substantial wealth and property in West Yorkshire and moved away to live in Parlington Hall near Leeds, leaving Castle Oliver to deteriorate in the hands of a bailiff. Their daughters, Mary Isabella and Elizabeth Oliver Gascoigne, both married members of the Trench family of Woodlawn, Galway. The younger sister, Elizabeth, married Frederic Mason Trench, 2nd Baron Ashtown in 1852. The sisters were highly accomplished artisans, designing and executing both the stained glass work and verre eglomise (back painted glass panels) which ornamented the ballroom fireplace. Much of their work has survived. The elder sister, Mary Isabella, was a highly skilled wood-turner who published (under a male pseudonym) an authoritative book on the subject, "The Art of Wood-Turning", still a respected source of information on the subject. 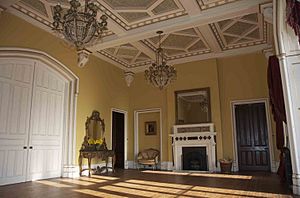 The sisters commissioned the present castle in 1845. It was designed by the York architect George Fowler Jones in the Scottish Baronial style and built in a local pink sandstone, quarried on the estate. Fowler Jones had designed several substantial commissions for the sisters in the north of England, including almshouses and churches. Whilst Mary Isabella and her husband made their home in the Yorkshire seat of the Gascoignes (Parlington Hall), Elizabeth and her husband occupied Castle Oliver. The house was later inherited by Elizabeth's step-grandson, the Honourable William Cosby Trench.

The last member of the Trench family to live at Castle Oliver, Mrs Lynn Trench, sold the property to the racing driver Billy Coleman in 1978. After that the castle changed hands several times, eventually becoming the property of a local bank, who broke up the remaining land, farm and lodges into separate lots. The castle itself failed to find a buyer and languished into decay, falling prey to vandals and thieves. It appeared in the book "Vanishing Houses of Ireland", published by the Irish Georgian Society.

In 1988 it was purchased by Damian Haughton, who according to the subsequent owner, put a halt to most of the worst leaks in the roof. In 1998 it was purchased by Nicholas Browne, who continued the restoration work and transformed it back into a habitable residence. In 2006 Castle Oliver was purchased by Declan and Emma Cormack from County Antrim. They completed high-grade restoration work, restoring many of the original rooms and features, such as the Library, St Patrick's stained glass window, wooden panelling, cornices and many fireplaces. They made the castle their home with their three children Michael, Shane and Ciara. In 2015 the Cormacks sold it to an unnamed family from Melbourne, Australia to use as a home for "several months of the year".

All content from Kiddle encyclopedia articles (including the article images and facts) can be freely used under Attribution-ShareAlike license, unless stated otherwise. Cite this article:
Castle Oliver Facts for Kids. Kiddle Encyclopedia.