Castle of Bredevoort facts for kids 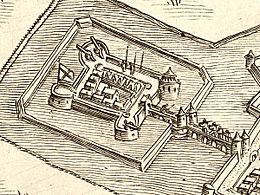 The name of the castle was for the first time written in the year 1188 as "castrum Breidervort". In 1646 lightning hit the gunpowder tower of the castle, causing an explosion that destroyed the castle and the town, killing Lord Haersolte of Bredevoort and his family, as well as others. Only one son, Anthonie, who was not home that day, survived. In April of the year 2009 they found big walls from 2,5 until 4 Metres in the ground in the heart of the town. On the square they did find remnants of the gate building which was a part of the ring wall surrounding the castle. That foundation is made visible on the square today.

All content from Kiddle encyclopedia articles (including the article images and facts) can be freely used under Attribution-ShareAlike license, unless stated otherwise. Cite this article:
Castle of Bredevoort Facts for Kids. Kiddle Encyclopedia.