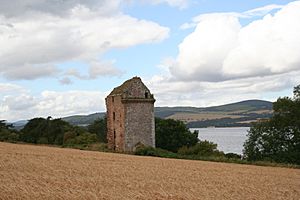 Castlecraig, also known as Craig Castle and Castle Craig, is a 16th-century fortification located on the north shore of the Black Isle in northern Scotland. It is on the south coast of the Cromarty Firth, 5 kilometres (3.1 mi) north-east of Culbokie and 19 kilometres (12 mi) north of the city of Inverness. The castle is protected as a scheduled monument.

Castlecraig is a ruined tower house. The north-east wing still stands and remains roofed, although another wing to the north-west has collapsed. The tower may have been used as a residence by the post-Reformation Bishops of Ross.

The New Zealand geologic formation of Castle Craig Rock is named for its similar appearance to Castlecraig.

All content from Kiddle encyclopedia articles (including the article images and facts) can be freely used under Attribution-ShareAlike license, unless stated otherwise. Cite this article:
Castlecraig Facts for Kids. Kiddle Encyclopedia.