Catalpa bignonioides is a species of Catalpa that is native to the southeastern United States in Alabama, Florida, Georgia, Louisiana, and Mississippi. Common names include southern catalpa, cigartree, and Indian-bean-tree (or Indian bean tree).

It is a medium-sized deciduous tree growing to 15–18 metres (49–59 ft) tall, with a trunk up to 1 metre (3 ft 3 in) diameter, with brown to gray bark, maturing into hard plates or ridges. The short thick trunk supports long and straggling branches which form a broad and irregular head. The roots are fibrous and branches are brittle, its juices are watery and bitter tasting.

The leaves are large and heart shaped, being 20–30 cm long and 15–20 cm broad. The bright green leaves appear late and as they are full grown before the flower clusters open, add much to the beauty of the blossoming tree. They secrete nectar, a most unusual characteristic for leaves, by means of groups of tiny glands in the axils of the primary veins. 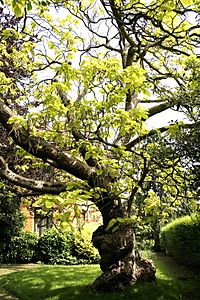 The flowers are 2.5–4 cm across, trumpet shaped, white with yellow spots inside; they grow in panicles of 20-40. In the northern states of the USA, it is a late bloomer, putting forth great panicles of white flowers in June or early in July when the flowers of other trees have mostly faded. These cover the tree so thickly as almost to conceal the full grown leaves. The general effect of the flower cluster is a pure white, but the individual corolla is spotted with purple and gold, and some of these spots are arranged in lines along a ridge, so as to lead directly to the nectar within. A single flower when fully expanded is two inches long and an inch and a half wide. It is two-lipped and the lips are lobed, two lobes above and three below, as is not uncommon with such corollas. The flower is perfect, possessing both stamens and pistils; nevertheless, the law of elimination is at work and of the five stamens that are expected to be found, three have aborted, ceased to bear anthers and have become filaments simply. Then, too, the flowers refuse to be self-fertilized. Each flower has its own stamens and its own stigma but the lobes of the stigma remain closed until after the anthers have opened and discharged their pollen; after they have withered and become effete then the stigma opens and invites the wandering bee. The entire Pink family behave in this way. 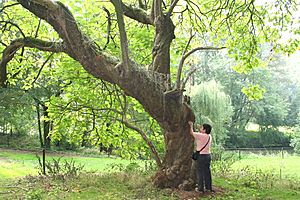 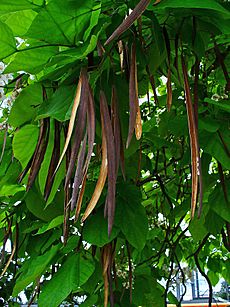 It is closely related to the Northern Catalpa (C. speciosa), and can be distinguished by the flowering panicles, which bear a larger number of smaller flowers, and the slightly slenderer seed capsules.

A 2003 study by J. Ness showed that when a hawkmoth caterpillar Ceratomia catalpae started eating the leaves of C. bignonoides, the leaves produced extra nectar. The nectar in turn attracted a greater number of bodyguard ants Forelius pruinosus to the damaged leaves, thus giving added protection to the whole plant. This is an example of a tree exhibiting a symbiotic relationship with nearby insects. 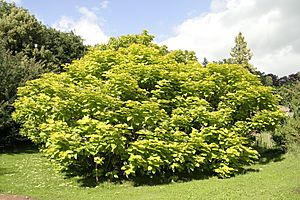 In the USA, Catalpa bignonioides is undoubtedly a Southern tree. Europeans first observed the tree growing in the fields of the Cherokee Native American tribes, who called it Catalpa. However, it can flourish in the North as well, and accordingly its original range is somewhat in doubt.

Despite its southern origins, it has been able to grow almost anywhere in the United States and southernmost Canada, and has become widely naturalized outside its restricted native range.

It is widely grown as an ornamental tree. The catalpa has the distinction of bearing some of the showiest flowers of all the American native trees. Its value in this respect has long been recognized and it holds an assured place in the parks and gardens of all temperate countries. It has gained the Royal Horticultural Society's Award of Garden Merit, as has the gold-leafed variety C. bignonioides 'Aurea'. The purple-leaved hybrid Catalpa × erubescens 'Purpurea' syn. C. bignonioides 'Purpurea', has also achieved the award (confirmed 2017).

It prefers moist soil and full sun. It is easily raised from seeds which germinate early in the first season. It also multiplies readily from cuttings. The tree is fairly free from fungal diseases and has few insect enemies.

The wood is brittle and hard, but does not rot easily; it is used for fence posts and railroad ties.

Catalpa bignonioides contains varying levels of iridoid glycosides that deter generalist herbivores, but which are tolerated by and concentrated in Ceratomia catalpae caterpillars. These caterpillars have a longstanding ecological relationship with the tree, and may defoliate a tree three or more times in a summer without killing it. Fishing enthusiasts prize the caterpillars as bait, particularly for catfish, and may freeze them for months after collecting them in the spring.

It is one of two parents of the interspecific hybrid tree × Chitalpa tashkentensis. The other parent is Chilopsis linearis. The cross was done by a Russian in Tashkent, Uzbekistan. The hybrid is sterile and at least two crosses exist, 'White Cloud' and 'Pink Dawn'.

The genus was common in Europe during the Tertiary period and its fossil remains have been discovered in the Miocene rocks of the Yellowstone River.

All content from Kiddle encyclopedia articles (including the article images and facts) can be freely used under Attribution-ShareAlike license, unless stated otherwise. Cite this article:
Catalpa bignonioides Facts for Kids. Kiddle Encyclopedia.