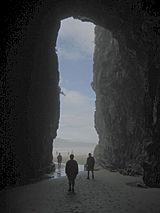 Inside one of the Cathedral Caves

The Cathedral Caves are one of the thirty longest sea caves in the world, located on Waipati Beach, 15 kilometres (9.3 mi) south of Papatowai, on the Catlins Coast in the southeast corner of the South Island, New Zealand. They are one of the most popular tourist attractions in the area, along with the McLean Falls, the highest water falls in the Catlins, located 4.9 kilometres (3.0 mi) away. The two main cave systems join together within the cliff and one has a 30 metres (98 ft) high ceiling. Often blue penguins and fur seals will emerge from the gloom at the far end of the cave.

The 199m-long cave is formed in Jurassic sandstone (about 160 million years old) of the Murihiku terrane, though the cave itself is much younger, ten to hundreds of thousands of years old.

The caves are only accessible two hours either side of low tide. Access to the caves from the road (Chaslands Highway) crosses private land, with a small user fee being charged to help maintain the road.

All content from Kiddle encyclopedia articles (including the article images and facts) can be freely used under Attribution-ShareAlike license, unless stated otherwise. Cite this article:
Cathedral Caves Facts for Kids. Kiddle Encyclopedia.