Kids Encyclopedia Facts
"Cathedral Cove" redirects here. It is not to be confused with Cathedral Caves. 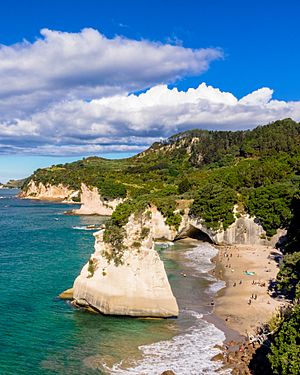 Te Whanganui-A-Hei (Cathedral Cove) Marine Reserve is in the southern part of Mercury Bay on the Coromandel Peninsula in New Zealand. On the coast of the mainland it runs from Cook Bluff in the north-west to the northern end of Hahei Beach in the south-east. Its offshore extremes run from Motukorure Island through Waikaranga Island to Okorotere Island and the northern end of Mahurangi Island (Goat Island). It covers an area of 840 hectares (2,100 acres).

Part of the marine reserve lies off the Cathedral Cove Recreation Reserve, which runs from the northern end of Hahei Beach in the south-east to beyond Cathedral Cove in the north-west. With attractions such as a natural rock archway and neighbouring beaches at Cathedral Cove, the area is very popular with tourists, and receives around 150,000 visitors per year.

The Māori name for Mercury Bay, Te Whanganui-A-Hei (meaning the Great Bay of Hei), refers to Hei, a tohunga from the Te Arawa waka. According to tradition, Hei chose the area around Mercury Bay as home for his tribe, proclaiming ownership by calling Motueka Island "Te Kuraetanga-o-taku-Ihu" (the outward curve of my nose). It is said he made this claim near the present-day town of Hahei.

The cave and beach was used as the tunnel through which the Pevensie children first re-enter Narnia in the movie version of The Chronicles of Narnia: Prince Caspian. More recently the cove was used as one of the locations in the music video for the song "Can't Hold Us" by Macklemore & Ryan Lewis featuring Ray Dalton.

All content from Kiddle encyclopedia articles (including the article images and facts) can be freely used under Attribution-ShareAlike license, unless stated otherwise. Cite this article:
Te Whanganui-A-Hei (Cathedral Cove) Marine Reserve Facts for Kids. Kiddle Encyclopedia.