The Cathedral Church of St. James is an Anglican cathedral in Downtown Toronto, Ontario, Canada. It is the location of the oldest congregation in the city, with the parish being established in 1797. The cathedral, with construction beginning in 1850 and opening for services on June 19, 1853, was one of the largest buildings in the city at that time. It was designed by Frederick William Cumberland and is a prime example of Gothic Revival architecture.

The church building is designated under the Ontario Heritage Act, and it is the episcopal seat of the Bishop of Toronto. Royal St. George's College, on Howland Avenue, is the church's choir school and is open to boys in grades 3 through 12. 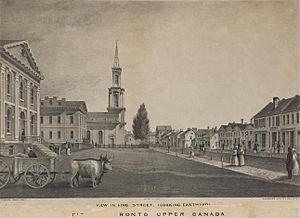 View of King Street, with the church in the background. The building was the second church to be built there.

The Anglican parish of St. James was established in 1797 in the then-town of York. In 1807, the first church was built of wood. It was used in 1813 as a hospital during the War of 1812, and it was subsequently robbed and damaged by the American troops. Shortly after, in 1818, the church was enlarged and a bell tower addition was completed. The bell was used as a fire bell for the town.

In 1833, the wooden structure was taken down and replaced by a stone structure in the Neoclassical style. In January 1839, the church burned down and was reconstructed. Upon reopening in December 1839, the church became a cathedral. St. James Cemetery, the parish cemetery, was moved in the 1840s to St. James-the-Less at Parliament and Bloor streets, although there are still unmarked graves under the modern parking lot.

In 1849, the cathedral was destroyed in the first Great Fire of Toronto. An international architectural competition was held to replace it, drawing eleven entries from Canada and the United States. The Gothic Revival design by Frederick William Cumberland and Thomas Ridout placed first, followed by the submissions of John Ostell and Kivas Tully respectively.

Construction began on July 1, 1850, and the Ohio stone and brick cathedral was opened to the public in 1853. The cathedral's original organ was built in 1853 by Samuel Russell Warren. Upon his death in 1867, John Strachan, Toronto's first Anglican bishop, was buried in a vault beneath the high altar. Dean Henry James Grasett (1808–1882) was also buried here. 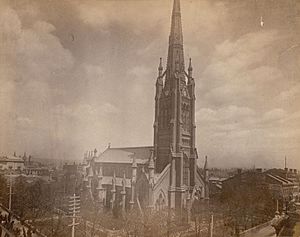 It was not until 1873–1874 that the tower and spire, the transepts, and the pinnacles and finials were completed by architect Henry Langley. The spire was the tallest structure in Canada upon completion and would remain so for another 25 years until the construction of Toronto's Old City Hall. The tower's clock was installed one year later.

In 1889, side galleries and aisles were removed, and the choir stalls and organ console were installed in the chancel. In 1936, St. George's Chapel was dedicated, and the organ was overhauled by Casavant Frères.

Major renovations were completed in 1982. The parish celebrated its bicentenary in 1997, when the peal of 12 change ringing bells was installed as the largest peal in North America. They are one of only nine peals of 12 bells outside the British Isles, and one of only two in North America, the other being located at Trinity Church in New York City.

To raise money to help pay for the rising costs of maintaining the cathedral, part of the grounds were planned to be sold to a condominium developer. Part of the land was to have been part of the original cemetery, and the developers planned to move the graves in order to clear the land. A public outcry ensued, and a deal was made to sell off a parking lot to the northwest of the cathedral for the SP!RE condominium development. 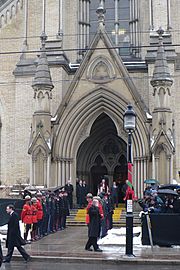 In addition to the funerals of former Bishops of Toronto, there have been notable funerals at St. James for other prominent people from the Toronto area, including:

The Rev. George Okill Stuart, who served from 1800 to 1812, and the Rev. John Strachan are the only graves located within the cathedral.

St. James Cathedral's Gothic Revival architecture is reflected throughout the structure. Every part of a Gothic cathedral is directly related to a "core dimension" which is used as an effort to achieve harmony and organic unity within the building where everything is linked rationally and proportionally, creating a coherent whole. Every element in the cathedral—including the stained glass windows, the pointed arches, high ceilings, the pinnacles, even the flying buttresses—allow as much light as possible to flood the interior. The Gothic style means an aesthetically unified whole, but the combination of different architectural elements such as the ribbed vaults, flying buttresses, and pointed arches allows for generous illumination of the interior space with natural light. 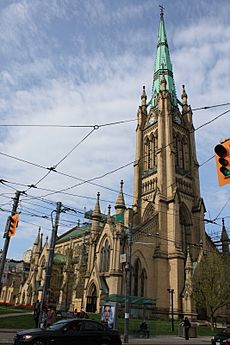 The cathedral's exterior is composed of white brick and Ohio sandstone. Several layers of brick in the facade create strong, square inset designs around the lancet windows of the clerestory. This allows for a play of light and shadow that dramatizes the heaviness of the wall, and was the effect of emphasizing the wall's depth by partially cutting into it. The spires are built of stone and decorated with pinnacles and dormers, and ball flower ornaments atop the pinnacles. Tower walls are reinforced with square and octagonal buttresses that taper abruptly with generous weatherings at transitional points and terminate in pinnacles, some with slender colonettes abutting chamfered edges, with ribbed, stepped, or gable caps. These buttresses are accented by heavy weatherings in lighter coloured stone (creating visual contrast while drawing attention to the points of stress on the building), and topped with pinnacles, thus emphasizing their massiveness, structural function, and verticality. They provide spatial rhythm on the east and west facades.

A careful balance between horizontal and vertical elements can be observed throughout the interior and exterior of the church. On the exterior, a dog-toothed fret runs along the aisle roofline, while on the interior, a band of continuous painted bosses similarly run along the top of the aisle wall. These horizontal bands balance the composition against the verticality of the exterior tower and pinnacles, and the interior pointed arches of the nave arcade, creating a sense of stability and repose.

At 92.9 metres (305 ft), the tower and spire have remained the tallest in Canada and the second tallest in North America after St. Patrick's Cathedral, New York—although the spire of St. James is still shorter than the dome of Saint Joseph's Oratory in Montreal, which is the tallest church in the Western Hemisphere. The tower has five bells that still ring through the city today, and the chiming clock is "one of the finest examples of a chiming public clock anywhere in the world." At the turn of the 20th century, St James' Cathedral was still the tallest building in Toronto, and was often the first thing immigrants noticed when they stepped off the train at the old Union Station.

The total length of the cathedral is 198 feet (60 m), with a maximum width of 98 feet (30 m). A four sided arch with steeple was erected alongside the cathedral as a military memorial. 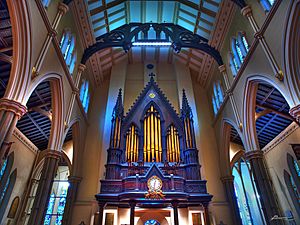 Over the principal entrance, a carved organ cover rises over a royal coat of arms, while Minton tile-work lies underfoot. The organ has 5000 pipes and includes the original gallery organ from 1853 over the main south entrance at the rear of the cathedral. Trumpet pipes have since been added to the gallery organ. The front chancel and aisle pipes were added in 1916.

In the interior, the absence of galleries frees the vertical movement of the arcade and clerestory. A high-pitched roof of heavy timber, crowned with enriched ribs and carved bosses creates a sense of shelter to the nave. The exposed rafters of the roof of the nave are articulated structural elements, and broad tie-beams and decorative cornices accent the joints. The elegant vault of the apsidal chancel, though expressing the thrust from the vault in the ribs that flow down to the ground, is a sham vault of lath and plaster that is coloured to represent stone.

The division of the interior into six bays is reflected on the exterior by the buttresses along the east and west elevations. Pews flow through the arcade in rows of four, gallery fronts, and chancel panelling is all black walnut, as are the Corinthian capitals. Glazing bars of windows in sash of varying widths are reminiscent of Gothic tracery, creating divisions in the stained glass. 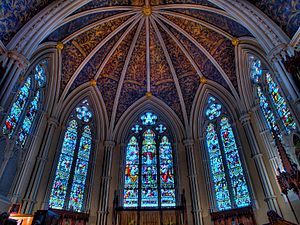 Stained-glass windows atop the church's altar

The cathedral is oriented on a north-south axis, whereas the traditional orientation is on an east-west axis with the altar at the east end. The orientation, decided by the design committee at the time, conforms to the symbolic representation of the church at the time, where the conflict with the American troops was apparent. The pews are oriented in central rows, with aisles on each side. The comfort of the seating was not highly regarded in the design.

Uniquely within the city of Toronto, the fully professional 18-voice cathedral choir sings at the Eucharist (11:00 am) and Evensong (4:30 pm) each Sunday. Its repertoire spans eight centuries. Choral Eucharist is also celebrated at 9:00 am each Sunday and is sung by a group of volunteers.

The cathedral's pipe organ can be heard in recitals each Tuesday at 1:00 pm and Sunday at 4:00 pm throughout the year. The recital series is curated by the cathedral's organist, David Simon.

Created in the early 20th century (the east and south sides around the park required demolition of a series of three-storey buildings), the park's Postmodern landscaping is Victorian-inspired, with formal gardens and a water fountain. Two walkways with park benches cross the park diagonally, with a large ornamental gazebo in the middle functioning as a central meeting place.

All content from Kiddle encyclopedia articles (including the article images and facts) can be freely used under Attribution-ShareAlike license, unless stated otherwise. Cite this article:
Cathedral Church of St. James (Toronto) Facts for Kids. Kiddle Encyclopedia.