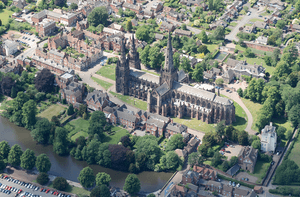 The Lichfield Cathedral Close from the air 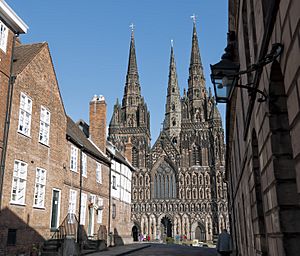 Western entrance to the Cathedral Close

After raids from the Vikings during 9th century the Cathedral lost some of its power. Bishop Clinton fortified the Cathedral in the 12th century. On three sides a deep man-made ditch was dug and the south was defended naturally by Minster Pool. This fortification effecively created the Close.

In 1299 Bishop Langton was licensed to wall the Close in stone and crenellate it. He also rebuilt the gates. The work was unfinished at his death in 1321. In 1322, during the crisis involving Thomas, earl of Lancaster, the chapter under royal pressure ordered the immediate clearance of the ditch and the completion of the west tower of the south-east gate. The fortification comprised corner towers and interval towers along the wall. An octagonal tower at the north-east corner was incorporated in Langton's palace; its base still survives. At the south-east corner there was a parapet along the top of the wall and a projecting turret, which survive as part of the later St. Mary's House. The south-west tower was recorded in 1312–13 and was shown on Speed's 1610 map of Lichfield; it had been demolished by 1661. The north-west tower had a statue of Bishop Walter, presumably Walter Langton, in the 1390s; the tower was evidently another Civil War casualty. Three interval towers were placed on the east wall, two of them incorporated in Langton's palace and the third on the site of the later Selwyn House. The Dean's Tower, so called in 1315, apparently stood on the west wall; it had been demolished by 1661.

The gate built by Langton at the south-east corner of the Close had two towers. The eastern one, whose base was excavated in the late 1980s, was a half-octagon with 12-ft. sides. The western tower was presumably of similar dimension. The gate had a portcullis in 1376. There was a drawbridge, still in existence in the earlier 18th century, which crossed the outflow of water from Minster Pool, and also a wicket for pedestrians. The gate was removed in the mid 18th century in order to improve access for coaches into the Close. A northward extension of the eastern tower was used as a porter's lodge in the early 17th century. After being damaged in the Civil War, it was rebuilt and in 1666 was assessed for tax on four hearths. By 1734 the porter or verger lived in a house at the west gate, and the former lodge was demolished between 1812 and 1836.

The west gate was completed by the chapter in the time of Bishop Northburgh, 1322–58. It was in the form of a tall block with side windows. It was decorated with coats of arms, and there was a statue of the Virgin Mary by 1530. The gate was demolished in 1800 to make room for Newton's College. Traces of its stonework survive on the north side of the road from Beacon Street. A house, evidently at the north-west corner of the gate, was let in 1661 to James Barrow, a tailor. He converted a dungeon underneath the house into a cellar for his own use and was ordered by the chapter to dig another dungeon of the same size with a hole to provide light. In 1734 the house was occupied by the verger; it was rebuilt in 1835 and survives as no. 1 the Close. There is no evidence that the Close ditch ever contained water. It was dry in the 1590s, and evidently in the mid 1550s. By the mid 17th century it was called the Dimple or Dimble, a name meaning a deep hollow filled with trees or bushes.

All content from Kiddle encyclopedia articles (including the article images and facts) can be freely used under Attribution-ShareAlike license, unless stated otherwise. Cite this article:
Cathedral Close, Lichfield Facts for Kids. Kiddle Encyclopedia.