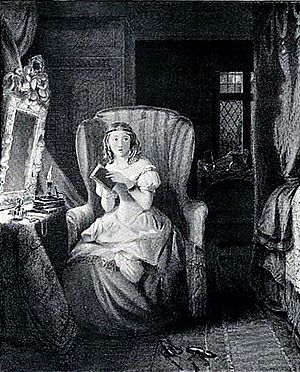 Catherine, believing that the scary novels she reads are true

Catherine Morland is the principal character in Jane Austen's book Northanger Abbey. She enjoys reading the mysterious and frightening gothic novels that were popular in her time. She often has a tendency to blur the lines between fiction and reality, which causes her a great deal of trouble. She is the neighbor of Mr. Allens, a rich man, and goes with him to Bath, a city in Northeastern Somerset, England. Jane Austen used her to mock the obvious classics where the perfect heroes fall in love with the heroines, and they marry and live "happily ever after".

Jane Austen, in the beginning of Chapter Two, describes her as having a heart that "was affectionate (loving)", a "disposition (character) cheerful and open, without conceit (pride) or affectation".

The book Northanger Abbey begins with, "No one who had ever seen Catherine Morland in her infancy, would have supposed her born to be an heroine." Her father, Richard, is a clergyman (pastor) who, even though he is not rich, is not poor; her mother is "a woman of useful plain sense, with a good temper, and, what is more remarkable, with a good constitution." Catherine is called "plain" when she is young, with "a thin awkward figure, a sallow skin without colour, dark lank hair, and strong features..." She likes to play boy's games more than playing with dolls, and does not like lessons, though she does like stories and fables. Catherine likes "tinkling the keys of the old forlorn spinnet (piano)," but she hates learning music, and "the day which dismissed (sent away) the music-master was one of the happiest in Catherine's life." She does not draw well; she did not like writing, or accounts, or French. However, she is usually nice to her brothers and sisters, and listens to her parents.

Catherine becomes "almost pretty" at 15, when she grows plumper, cleaner, and more animated. She begins reading better books, like those that Pope, Gray, Thompson, and Shakespeare's. Mrs. Allen invites her to come to Bath with her, and she agrees. There, she is always very polite to Mrs. Allen, and is humbly satisfied when a few men call her a "pretty girl." She falls in love with Henry Tilney, and even though they misunderstand each other some times, they quickly become good friends. She also becomes friends with elegant Eleanor Tilney, and she is invited to Northanger Abbey. General Tilney, Henry's father, is kind to her, and she is happy. But sometimes she is too imaginative: for instance, she thinks General Tilney murdered his wife. Henry's gentle talk with her soon makes her more clear-sighted. The sudden rudeness of General Tilney makes her very sad until Henry comes and proposes to her; he also explains the General's first attentions, and later rudeness: the General had at first thought Catherine was very rich, and later thought Catherine was really poor. Actually, Catherine is neither - she lives quite comfortably. At the end of the book, they marry happily.

All content from Kiddle encyclopedia articles (including the article images and facts) can be freely used under Attribution-ShareAlike license, unless stated otherwise. Cite this article:
Catherine Morland Facts for Kids. Kiddle Encyclopedia.