The Cave Creek Museum is a private non-profit entity at the base of the Black Mountains in the town of Cave Creek in Maricopa County, Arizona, United States. The museum preserves artifacts of the prehistory and objects related to the culture of the Cave Creek/Carefree foothills area. The museum consists of various exhibits, indoor and outdoor. Among the outdoor exhibits are the first church of Cave Creek and the last tubercular cabin in the state of Arizona.

In 1968, a group of local volunteers, who formed a historical society, founded the Cave Creek Museum on land donated by Frank and Hazel Wright. Their mission was and is to preserve artifacts related to the prehistory, history and culture of the Cave Creek/Carefree foothills. The main plan was to accomplish the set mission through education, research and interpretive exhibits and programs.

In April 1970 the museum officially opened its doors. Inside the museum there are four areas of historical exhibition. The names of the four areas are the Central Ansbaugh Auditorium which has a display of textiles, oil paintings, jewelry and sculptures, the Archaeology Wing, the Pioneer Wing which features artifacts from Cave Creek's mining, military, settler and ranching days and the "Mini-wing".

Outside on the museum grounds is the first church of Cave Creek which was relocated there. There is also the last tubercular cabin in the state Of Arizona. The cabin is listed in the National Register of Historic Places.

Gold prospectors began to venture into Arizona upon the discovery of gold and set up mining camps all the way to Cave Creek. One of the exhibits is the Golden Reef Stamp Mill. Other exhibits include tools and machines used by the early ranchers in the area.

The following are the images of the Cave Creek Museum: 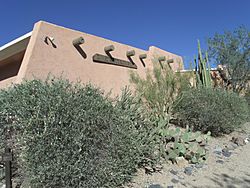 All content from Kiddle encyclopedia articles (including the article images and facts) can be freely used under Attribution-ShareAlike license, unless stated otherwise. Cite this article:
Cave Creek Museum Facts for Kids. Kiddle Encyclopedia.