Prior to the establishment of the Pioneer and Military Memorial Park, there were other cemeteries already in existence as early as 1850. The citizens of the newly founded city became concerned with the "old" cemetery, which was once located between 5th and 7th Avenues and Jackson and Madison Streets, near a newly built train station. They feared that the sight of the "old" cemetery would be an unpleasant one to the railroad passengers who would visit the city in the newly established railroad system.

In 1884, the city counsel decided to purchase Block 32 in what archaeologists have now determined were the ruins of a pre-Columbian Hohokam community which they named "La Villa". The families who had their loved ones buried in the old cemetery, had them moved to the new one. The city also reburied the unclaimed bodies in a common grave in the new cemetery. On October 8, 1884, John R. Loosley became the owner of some of the western portion of "Block 32". He moved bodies from the potters field of the old cemetery and buried them in what became known as the "City" or "Loosley" cemetery. In 1888, Lulu G. Porter, wife of DeForest Porter, acquired the south half of Block 32 and had it laid out as a cemetery, which is now known as Porter cemetery.

The "Block 32" cemetery is made up of seven historic cemeteries which were in use between 1884 and 1914. Each of the seven cemeteries has its own name: the "Ancient Order of United Workmen" (AOUW), "Independent Order of Odd Fellows (IOOF)", "Knights of Pythias" (K of P), "Loosley" (also known as City Cemetery), "Masons", "Porter" and "Rosedale". In 1914, a law forbidding further burials within city limits went into effect and the seven cemeteries were declared closed. The cemeteries fell into a state of abandonment. After years of disrepair, the citizens of Phoenix rallied to restore the cemeteries. After the cemeteries were restored, they were officially designated, in May 1988, as the "Pioneer and Military Memorial Park". It is estimated that there are 3,700 burials; however, fewer than 600 of these graves have headstones.

The area which comprises the Pioneer and Military Memorial Park is bounded by 13th and 15th Avenues and Jackson and Harrison Streets. The main entrance is located at 1317 W. Jefferson Street.

In 1930, the Pioneers' Cemetery Association was founded. The association began the preservation and restoration of the cemeteries in the Pioneers and Military Memorial Park. They were also in charge of researching the history behind the burials. However, their work was interrupted by the death of Thomas Hayden, the prime researcher, and by World War II. The present Pioneers' Cemetery Association was formed in 1983 and has continued the work which was previously interrupted by the events previously mentioned. The association has a working relationship with the City of Phoenix.

The Smurthwaite House was designed and built in 1897 by Creighton & Millard, a local firm, for Dr. Darius M. Purman and his wife, Mary. The house, which was originally located at 602 N. 7th Street, was intended to be used as a boarding house. In 1903, the Purman's sold the house to National Bank of Arizona of Phoenix. That same year Captain Trustrim Connell, recipient of the Medal of Honor, and his wife Ann purchased the house. In 1938, it was deeded to their daughter Caroline who married Charles Smurthwaite. Later, the house was passed on to the Smurthwaite's daughter, Carolann Smurthwaite, who lived there until her death in 1982. Carolann had willed the house to be jointly administered by the Phoenix Art Museum, The Museum of Northern Arizona and the Heard Museum.

In 1991, the Heritage Fund approved a grant of $50,000 to restore the Smurthwaite House and in 1994, the house was moved to its current location at 1317 W. Jefferson Street. It currently serves as the office of the historic "Pioneer and Military Cemetery".

The "Bird's eye view of Phoenix, Maricopa Co., Arizona" map, created in 1885 by Czar James Dyer, is on display in the main room of the Smurthwaite House. In 1899, Dyer served as Phoenix's acting mayor.

The interior furnishings and decorations of the Smurthwaite House.

Every year "Historic Cemetery Walking" tours, sponsored by the Pioneers’ Cemetery Association, are held. Among the notable burials included in the tours are the following: 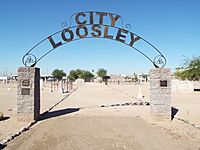 All content from Kiddle encyclopedia articles (including the article images and facts) can be freely used under Attribution-ShareAlike license, unless stated otherwise. Cite this article:
Pioneer and Military Memorial Park Facts for Kids. Kiddle Encyclopedia.