Kids Encyclopedia Facts
This page is about the museum in Phoenix, Arizona. For the natural science museum in McKinney, Texas, see Heard Natural Science Museum and Wildlife Sanctuary.

The mission of the Heard Museum is to be "the world's preeminent museum for the presentation, interpretation and advancement of American Indian art, emphasizing its intersection with broader artistic and cultural themes." The main Phoenix location of the Heard Museum has been designated as a Phoenix Point of Pride.

The Heard Museum was founded in 1929 by Dwight B. and Maie Bartlett Heard to house their personal collection of art. Much of the archaeological material in the Heards' collection came from La Ciudad Indian ruin, which the Heards purchased in 1926 at 19th and Polk streets in Phoenix.

Portions of the museum were designed by architect Bennie Gonzales, who also designed Scottsdale City Hall.

From its start as a small museum in a small southwestern town, the Heard has grown in size and stature to where now it is recognized internationally for the quality of its collections, its educational programming and its festivals. The current collection of the Heard Museum consists of over 40,000 items including a library and archives with over 34,000 volumes. The museum has over 130,000 square feet (12,000 m²) of gallery, classroom, and performance space. Some exhibits include:

The Heard Museum now attracts about 250,000 visitors a year. The Heard is an affiliate in the Smithsonian Affiliations program. The director of the museum from January 2010 through July 2012 was Dr. Letitia Chambers, the first Heard director to be of American Indian descent. From August 5, 2013 to February 27, 2015, the museum was led by James Pepper Henry, a member of the Kaw Nation of Oklahoma and the Muscogee Creek Nation. The museum is now led by David M. Roche, who began his tenure January, 2016.

The museum is a member of the North American Reciprocal Museums program. 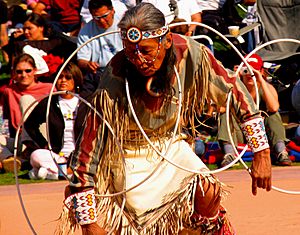 The judges of this competition come from a diverse range of occupations including experienced artists, museum curators, gallery directors, and art collectors. All have in-depth experience in judging artwork, and the majority of these judges come from American Indian tribes. Awards and cash prizes are given for Best of Show, Best of Division (first and second place), and an additional Conrad House award. The judges also confer a Judge's Choice ribbon and an Honorable Mention ribbon.

All content from Kiddle encyclopedia articles (including the article images and facts) can be freely used under Attribution-ShareAlike license, unless stated otherwise. Cite this article:
Heard Museum Facts for Kids. Kiddle Encyclopedia.