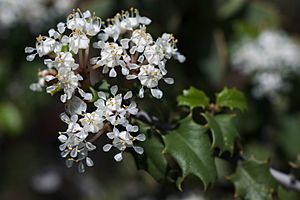 Ceanothus jepsonii is a species of shrub in the family Rhamnaceae known by the common names musk brush and Jepson ceanothus.

This species of shrub is variable, particularly across its two varieties:

Both varieties have firm, toothed evergreen leaves oppositely arranged, curved, often spiny (holly-like), and with their edges turned under. The flowers tend to have a musky odor.

It is endemic to California, where it grows in dry, shrubby habitat in the San Francisco Bay Area and the Coast Ranges to the north, often on serpentine soils.

All content from Kiddle encyclopedia articles (including the article images and facts) can be freely used under Attribution-ShareAlike license, unless stated otherwise. Cite this article:
Ceanothus jepsonii Facts for Kids. Kiddle Encyclopedia.