Cecily Parsley's Nursery Rhymes is a children's book written and illustrated by Beatrix Potter, and published by Frederick Warne & Co. in December 1922. The book is a compilation of traditional nursery rhymes such as "Goosey Goosey Gander", "This Little Piggy" and "Three Blind Mice". It was Potter's second book of rhymes published by Warne. Merchandise generated from the tale includes Beswick Pottery porcelain figurines and Schmid music boxes.

Beatrix Potter's career as a children's author and illustrator was launched in 1900 when she revised a tale written in 1893 about a humanized rabbit, fashioned a dummy book in imitation of Little Black Sambo, and privately published her work in December 1901 after a series of publishers' rejections. Frederick Warne & Co. had rejected the tale but, eager to compete in the burgeoning and lucrative small format children's book market, reconsidered and accepted the "bunny book" (as the firm called it) following the endorsement of their prominent children's book artist L. Leslie Brooke. Potter agreed to colour her pen and ink illustrations for the trade edition, and chose the then-new Hentschel three-colour process for reproducing her watercolours. On 2 October 1902 The Tale of Peter Rabbit was released.

Potter continued to publish for Warne and in 1905 moved to the Lake District, and her small format books thereafter focused and nearby villages. Her career came to an end in 1913 when marriage to William Heelis, the demands of an aged mother, failing eyesight, and the business of operating Hill Top prevented her from investing any time and attention in book production. She continued to publish sporadically after 1913, but her work lacked the brilliance of her earlier years and depended upon the retrieval of decades-old artwork and concepts rather than artistic growth and expansion.

Potter was enthralled with nursery rhymes and enjoyed rewriting traditional rhymes to refer to her animal characters. Her early work was crammed with rhymes, as evidenced in the privately printed edition of The Tailor of Gloucester.

Her interest in rhymes was partly an attraction to the rhythms of older forms of English, and partly to the mysteries and riddles many rhymes presented. Potter took inspiration from childhood favourite Randolph Caldecott, especially his rhymes that gave prominent place to animals, and, in her 1902 correspondence with Norman Warne about the publication of Peter Rabbit, indicated she "sometimes thought of trying some of the other rhymes about animals, which [Caldecott] did not do."

In the autumn of 1920, Potter proposed a book of nursery rhymes to her publisher Fruing Warne from those she had collected over the years. Titled Cecily Parsley's Nursery Rhymes, Warne doubted such a collection would sell. In 1921, however, Anne Carroll Moore, the Superintendent of Children's Work for the New York Public Library, visited Potter at her home, and expressed great interest in the book. Energized by her visitor's enthusiasm, Potter recommenced work on the rhymes. Fruing Warne realized he was not likely to receive anything else from Potter for the year and accepted Cecily Parsley as the new book for Christmas 1922. 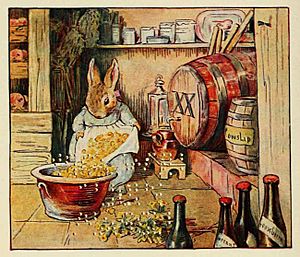 By spring 1922, Potter had recopied the rhymes she wanted to use and sent them to Warne. Potter chose the pictures of the Gardening Guinea Pigs and Nanny Netticoat from an 1897 version of the book. A friend, Louie Choyce, provided the rhyme for the illustrations of the guinea pigs and another rhyme about a rose which was not used. Fruing Warne was a cautious editor and asked that the line about cutting off the tails of the mice in "Three Blind Mice" be dropped. Potter complied but later insisted it be restored because the rhyme was incomplete without it. In the illustration of Cecily Parsley brewing ale, Warne decided the drink should be brewed from cowslips rather than apples – apparently unaware of the alcoholic content in cowslip wine. Potter sent Moore an autographed copy for her doll, Nicholas Knickerbocker. The original cover picture depicted Cecily Parsley with a tray but the picture was too similar to the cover picture for Appley Dapply's Nursery Rhymes and was changed to Cecily Parsley pushing a wheelbarrow. The book was the last in the Peter Rabbit format.

The book contains the following rhymes:

Potter confidently asserted her tales would one day be nursery classics, and part of the process in making them so was marketing strategy. She was the first to exploit the commercial possibilities of her characters and tales with spinoff merchandise such as a Peter Rabbit doll, a board game called The Game of Peter Rabbit, and nursery wallpaper between 1903 and 1905. Other "side-shows" (as she termed the ancillary merchandise) were produced over the following two decades.

In 1947 Frederick Warne & Co. gave Beswick Pottery of Longton, Staffordshire rights and licences to produce the Potter characters in porcelain. Four figurines based on Cecily Parsley were released beginning in 1965: Cecily Parsley; And This Pig Had None; This Pig Had a Bit of meat (limited edition); and Head Gardener. All the figurines were retired by 2002.

In 1975 Crummles of Dorset began producing 1 and 5/8-inch diameter enamelled boxes depicting scenes and characters from the Potter tales. A box depicting Cecily Parsley brewing wine was released. In 1994 and 1995 Crummles was commissioned to create exclusive works for an American distributor. A stamp box depicting scenes from Appley Dapply and Cecily Parsley was released. Crummles closed its doors abruptly in 1995, and only 80 of the planned 150 stamp boxes were produced.

In 1977 Schmid & Co. of Toronto and Randolph, Massachusetts was granted licensing rights to Beatrix Potter. In 1982 Gentleman in Waiting (playing "Tomorrow") and Cecily Parsley were released. In 1973 The Eden Toy Company of New York was the first American firm to acquire rights to manufacture stuffed Potter characters in plush. Cecily Parsley was released in 1975.

All content from Kiddle encyclopedia articles (including the article images and facts) can be freely used under Attribution-ShareAlike license, unless stated otherwise. Cite this article:
Cecily Parsley's Nursery Rhymes Facts for Kids. Kiddle Encyclopedia.