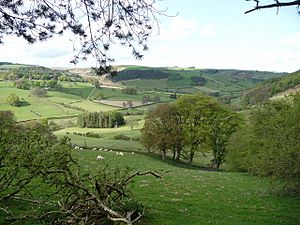 View over part of the Ceiriog Valley

The valley forms part of the traditional county of Denbighshire, and between 1974 and 1996 was part of the short-lived county of Clwyd. Part of the lower end of the valley extends into Shropshire, England. The Ceiriog Valley is 20 kilometres (12 mi) long and runs generally west to east, south of the Vale of Llangollen. It is something of a dead end, with the B4500 road terminating at Llanarmon Dyffryn Ceiriog, a village near the head of the valley.

The 8.25 miles (13.28 km)-long, 2 ft 4 1⁄2 in (724 mm)-gauge Glyn Valley Tramway used to run through some of the valley; it served various quarries and provided a passenger service between Chirk and Glyn Ceiriog.

The valley receives relatively few visitors, despite being only a few miles from the A5 road. It was warmly described by British Prime Minister David Lloyd George as "a little bit of heaven on earth". 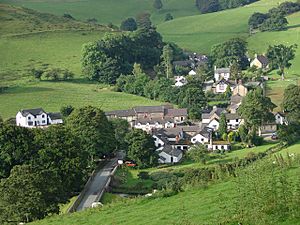 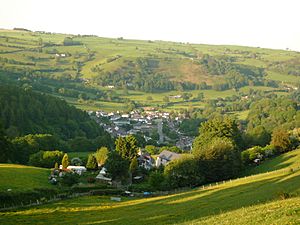 Three notable Welsh poets have connections with the Ceiriog Valley: John Hughes (1832–1887) was born on a farm near Llanarmon Dyffryn Ceiriog; Huw Morus (1622–1709) was born and lived near Pandy in the Ceiriog Valley; and Rev. Robert Elis (1812–1875) was a Baptist minister in Glyn Ceiriog from 1838 until 1840. (Hughes took the middle name Ceiriog and also used it as his bardic name; Morus's bardic name was Eos Ceiriog – the Nightingale of Ceiriog; and Elis was better known by his bardic name, Cynddelw.) The Ceiriog Memorial Institute in the village of Glyn Ceiriog was built as a memorial to them all, and contains stained glass windows dedicated to each of their memories.

The Welsh-language novelist Islwyn Ffowc Elis was born in Wrexham, but spent most of his formative childhood years on a hill farm in the Ceiriog Valley.

All content from Kiddle encyclopedia articles (including the article images and facts) can be freely used under Attribution-ShareAlike license, unless stated otherwise. Cite this article:
Ceiriog Valley Facts for Kids. Kiddle Encyclopedia.