The resort, owned by Sir Terry Matthews, is located on the south-facing side of Christchurch Hill in eastern Newport, overlooking Junction 24 of the M4 motorway. The golf courses extend over the ridge and down the north-facing side of the hill into the Vale of Usk, with views up to the Wentwood escarpment. The resort covers 2,000 acres (810 ha) of land.

The earliest record of a building on the resort site was 1634, when it was the residence of the High Sheriff of Monmouthshire, Lewis Van.

The manor house was built in 1860 by Thomas Powell, the largest coalmine owner in the South Wales coalfield, the world's biggest coal exporter and the first coal millionaire. Powell's son, Thomas Powell Jnr, and his bride Julia Jenkins were given the mansion as a wedding gift when they married in 1859. They named it Coldra Hall.

After Thomas and Julia Powell's deaths on safari in Africa, Coldra Hall was leased to a number of tenants, including the Firbank family from 1900 until 1915. Charles Firbank was also a High Sheriff of Monmouthshire and well known for his generosity, entertaining parties of a hundred or more blind and disabled people. On Firbank's death in 1915, the hall was sold to Sir John Wyndham, a colliery and shipping entrepreneur, who added an additional wing.

In 1930 Wyndham donated the house to the local health authority and, in 1940, it became the Lydia Beynon Maternity Hospital, named in honour of his mother. Over 60,000 babies were born there, including the present owner Sir Terry Matthews. It closed as a hospital on 1 March 1977.

Matthews bought the Manor House in 1980, investing £100m in a redevelopment and refurbishment project. The house was renovated, retaining all its best older features. Initially with 17 bedrooms, the Celtic Manor Hotel opened in 1982. With the addition of a modern three-storey extension, by the early 1990s the hotel's capacity was expanded to 70 bedrooms. It received Egon Ronay Guide awards for the best hotel in Wales for five consecutive years. 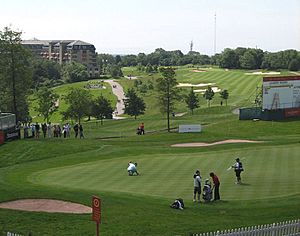 In 1991 plans were unveiled to develop two new golf courses and a convention centre on land between the Manor House and the River Usk. Matthews had become friends with the late golf-course architect Robert Trent Jones whose family roots were in Aberystwyth. Work began on the Roman Road course in 1992 – named after the main route connecting the former Roman fortress of Caerleon with the town of Caerwent which crosses the land. By 1994, work had commenced on the 400-bedroom Resort Hotel; as well as a £10-million golf clubhouse and the 4,000-yard (3,700 m) Coldra Woods golf course.

The new development was completed and opened in 1999. The former Celtic Manor Hotel was renamed "The Manor House" to distinguish it from the new "Resort Hotel." 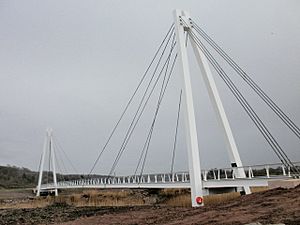 To prepare for the 2010 Ryder Cup, The Twenty Ten Course, designed by Ross McMurray, was built, as part of a £16 million development. This was the first golf course in history to be purpose-built for the event. The development included a 120-metre-long £2m twin-suspension bridge, the course and a new clubhouse and surrounding infrastructure, which was promised as part of the bid to host the event in 2001. The new bridge, The Twenty Ten Bridge, links the practice ground to the golf course across the River Usk and was officially opened by the First Minister of Wales, Carwyn Jones.

In 2019 the Twenty Ten Bridge was closed to the public in the form of two high sided gates. The Resort stated that any users accessing the bridge would be at risk of being hit by stray golf balls, due to the bridge being built next to the driving range. The closure has left the village of Caerleon with no pathway access to the Resort and its facilities, requiring patrons to take vehicular transport.

In July 2010 a bitter dispute developed between Matthews and Newport City Council's planning committee which refused permission for Matthews to demolish or move a ruined Grade-II listed building from a position overlooking the 18th green, a farmhouse dating back to 1630, described by Matthews as "damaging to the image of the entire nation". The Society for the Protection of Ancient Buildings said: "The problematic situation is entirely of the owner’s own making and refusal to safeguard the listed building over many years. It cannot be right to reward this by agreeing to a proposal to simply move a listed building out of the way."

It being known that a Roman settlement had been located at Great Bulmore, the Glamorgan-Gwent Archaeological Trust was appointed by the Celtic Manor Resort to oversee archaeological considerations prior to the course construction. The Trust worked closely with the designers to ensure the preservation of historic material and features. When a Roman pottery kiln was found during the construction of one of the greens,

While as much as possible of the potential archaeology was identified at the design stage, watching briefs were carried out during construction, since other structures might be discovered. As a result, construction work was halted in sensitive areas to give time to excavate features, including a second Roman pottery kiln with a probable workshop building and a Roman drying kiln.

On the site of the new coach park, a small square tower-like building was found well to the north of any Roman activity previously discovered. It lay alongside a lightly metalled track, that must have branched off the Caerleon to Usk road. There has been some argument as to whether it was military—a Roman watch tower (Castellum) for example—or whether it was a mausoleum where someone of importance had been buried. In the rubble that overlay the building were two pieces of an inscription, with a few letters on each. They were found to fit together, and Roger Tomlin, of the University of Oxford interpreted them as part of a verse referring to 'unjust fate', which could support the mausoleum theory.

In June 2012, Matthews and the hotel announced a £160M 10-year plan for developing the hotel as a resort. Creating 230 new permanent jobs, and 700 in construction and supply during the development, the additions were to include:

The resort hosted a special stage during the 2012 Wales Rally GB.

In 2001 the resort won its bid to host the 2010 Ryder Cup. As a result much of the Wentwood Hills course was redeveloped into the Ryder Cup's first purpose-built venue; the "Twenty Ten" Course. An additional clubhouse built specifically for the Twenty Ten course was completed and opened in autumn 2007. The opening of the Ryder Cup, which ran from 27 September until 4 October 2010, saw a visit from Charles, Prince of Wales. Europe won the trophy by 14½ – 13½ points.

In 2000 Celtic Manor hosted the PGA Cup, the biennial contest between club professionals from Great Britain and Ireland against the United States. The USA won 13½ - 12½.

The Celtic Manor hosted the All*Star Cup, a celebrity golf tournament televised firstly on Sky One in 2005 and then ITV in 2006. In a similar vein to the Ryder Cup, it pitched European celebrity golfers against American counterparts. Celebrities such as Ross Kemp, Bruce Forsyth, Jane Seymour and golfing enthusiast Alice Cooper took part. 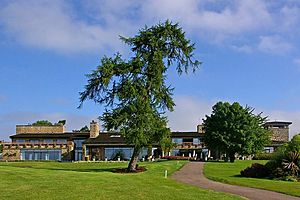 The Lodge, clubhouse for the Roman Road and Montgomerie golf courses

All content from Kiddle encyclopedia articles (including the article images and facts) can be freely used under Attribution-ShareAlike license, unless stated otherwise. Cite this article:
Celtic Manor Resort Facts for Kids. Kiddle Encyclopedia.