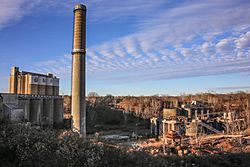 Cementland is an incomplete public art exhibit on the 54-acre site of a former cement factory just north of St. Louis, Missouri. The brainchild of sculptor Bob Cassilly, who also created St. Louis' City Museum, it contains giant concrete sculptures and obsolete machinery, and was planned to have navigable waterways, among many other features.

Much of the landscaping is built on dirt dumped by local construction companies, who used the land as a dump before Cassilly purchased it and who paid him for the privilege. Cassily was funding the construction of Cementland himself; the free material and income from the dumping helps underwrite what he said would "otherwise be an unaffordable project."

The site, outside the city boundaries in the village of Riverview, provides a view of the Gateway Arch. “In the afternoon, when the sun shines on the city, you get this nice reflection. You don’t see all the trash and stuff. It’s the best view of the city,” Cassilly said.

On September 26, 2011, Cassilly was killed at the Cementland site, and it initially was reported that he died when the bulldozer he was driving flipped down a hill. However, in October 2016, medical expert Dr. Arthur Combs concluded that Cassilly had been beaten to death, and the bulldozer accident staged.

The Cassilly family said that they had hopes to continue construction on the project, but after a fire in 2014, this seems unlikely. The site is currently closed to the public.

All content from Kiddle encyclopedia articles (including the article images and facts) can be freely used under Attribution-ShareAlike license, unless stated otherwise. Cite this article:
Cementland Facts for Kids. Kiddle Encyclopedia.