The Centaur Theatre Company is a theatre company based in Montreal, Quebec. It was founded in 1969 by The Centaur Foundation for the Performing Arts with Maurice Podbrey as the Artistic and Executive Director, and Herb Auerbach as Chairman of the Board.

The Centaur is the city's main English-language only theatre company.

From 1969 to 1973 the company leased the partially renovated auditorium in the historic building. In 1974 the Centaur purchased the building and spent $1.3 million in renovations under the design of architect Victor Prus.

The building reopened in 1975 with an additional auditorium. The original black box theatre was renamed "C1", and seats approximately 245 people. The newer venue was named "C2" and is a more traditional proscenium stage, seating approximately 425. 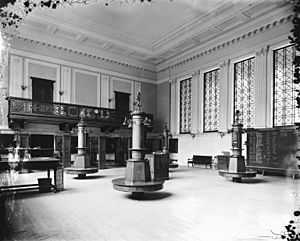 The interior of the Montreal Stock Exchange in 1903.

The Centaur Theatre is located in the Old Stock Exchange Building, formerly home to the Montreal Stock Exchange (MSE). It was built in 1903 by American architect George B. Post. The building served as the home of the MSE until 1965.

All content from Kiddle encyclopedia articles (including the article images and facts) can be freely used under Attribution-ShareAlike license, unless stated otherwise. Cite this article:
Centaur Theatre Facts for Kids. Kiddle Encyclopedia.