Central Square (Welsh: Sgwâr Canolog) is a large public space in Cardiff, Wales, adjacent to Cardiff Central railway station and including Cardiff bus station between 1954 and 2015. It was redeveloped and extended in the late 2010s and early 2020s.

The former bus terminal in 2007 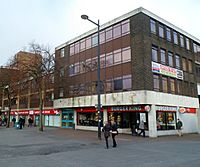 The former Marland House in 2012

Until the 1930s an area of terraced housing, churches and shops, named Temperance Town, occupied the current site of Central Square. Hence, due to its legal history, Central Square is to be one of a few areas in Cardiff designated an alcohol control zone, allowing the police even until present to confiscate alcohol.

Between 1932 and 1934, the Great Western Railway replaced the original 1850's station building (also designed by their architects department) with an impressive new Art Deco building faced in Portland stone, enclosing including a booking hall with noted Art Deco light fittings, all topped by a clock cupola. The Great Western Railway has its full name carved onto the façade (larger than the name of the station). During the new station's planning and constructions, the GWR made representation to Cardiff Corporation to improve the immediate area. As a result, from 1930 the Corporation started to plan the removal of the adjacent working-class district, Temperance Town.

The streets of Temperance Town were demolished in 1937, although the intervention of World War II halted redevelopment plans until post-war. A new bus station was opened in 1954, and a new office building, Marland House, was constructed to the east of the bus station. 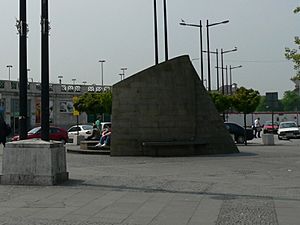 The sculpture Cadar Idris, in Central Square in 2006

In 1999 a 4m high sculpture, Cadar Idris, was erected in Central Square. However, within 6 months it was reportedly described as a 'dirty disgrace' and (in 2008) attracting undesirables to congregate on it. It was later dismantled and relocated to Cardiff Bay Wetlands Reserve.

By the early 2010s, Marland House had become a hard to let 1950's office block, which mainly housed a multi-storey car park; plus a series of street-side shops including a Greggs, Burger King, Cardiff Point, but mostly occupied by charity shops. With the development of St David's 2 shopping centre complete, and the resultant pedestrianisation of St Mary Street, Cardiff Council were now looking further eastwards to redevelop the Square, with the aim of creating a modern transport gateway to Cardiff city centre.

In 2010 hotel developer Urban Solutions promised £300,000 towards improvements towards the long term regeneration of Central Square. They also agreed to fund 12 cycle stands and the OYBike hire point outside Central Station.

In 2012 another proposal was unveiled by Cardiff Council to sell-off the existing bus station land for redevelopment and invest some of the money in Central Square, to be renamed 'Capital Square'. An 80 metre long fountain was envisaged by the architecture firm, Stride Treglown, along with a 'Welsh Garden' reflecting the landscape of Wales. The bus station would close in September 2012 and a 10-12 storey office headquarters built on the site. A new bus station would be constructed to the east, after the later demolition of Marland House.

In October 2014 another masterplan was announced, including one million square feet of new office space and a 200-bed hotel. The masterplan was being overseen by Foster and Partners, led by Cardiff-born partner Gerard Evenden. As well as the original office space and hotel, the new plan also accommodates the relocated headquarters and main news studios of BBC Wales in a new feature building.

Construction began in Autumn 2015 on buildings located on the old bus station, with Marland House now scheduled for demolition from Summer 2016. The new plan for the Marland House site fits in with a proposed £80M development of Cardiff Central station, with a two floor shopping and retail area located above a new bus station, connected to the railway station through both structures extensive use of glass. 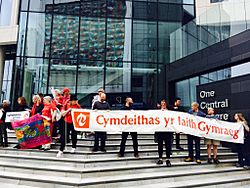 In May 2016 Cymdeithas yr Iaith organised a protest in the square citing an apparent lack of Welsh language use by the development company Rightacres in its name, signage and advertising.

All content from Kiddle encyclopedia articles (including the article images and facts) can be freely used under Attribution-ShareAlike license, unless stated otherwise. Cite this article:
Central Square, Cardiff Facts for Kids. Kiddle Encyclopedia.