Central Village is a shopping, leisure, commercial and residential development that is currently under construction in Liverpool, England, United Kingdom. The complex is being built over Liverpool Central railway station, the UK's busiest underground station outside London. The core of the project is two high rise blocks of 25 and 20 floors linked by a 9-storey residential and commercial podium and two nine and five storey buildings for residential, hotel and commercial use. The development is by Merepark and is predicted to cost roughly £160 million. It is one of a number of ambitious projects to take place in Liverpool city centre in the early 21st century - other developments being Liverpool One, King's Dock, Prince's Dock, Lime Street Gateway, Metquarter and developments in the Commercial District. The proposed development includes the famous Lewis's department store building. Besides the residential, commercial and leisure aspects of the development, there will also be a number of office buildings and a large QPARK multi-storey car park - which will be the first part of Central Village to be completed in 2011. Planning permission was granted for the project by Liverpool City Council in May 2009, and final approval was given for construction of the entire complex to commence in February 2010. The entire Central Village scheme was due for completion in 2015 however is still to be completed due to a series of delays. 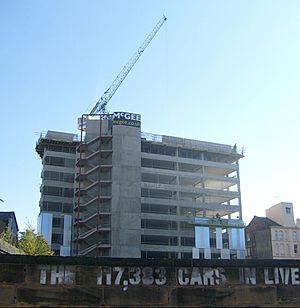 The QPARK multi-storey car park under construction in October 2011

The 'Boardwalk' is the centrepiece of the Central Village development; retail and leisure facilities are the sole components of this area. The Boardwalk will consist of 3,700 m2 (40,000 sq ft) of leisure space over two levels (the Boardwalk level and the Plaza level). There are seven units that will be leased with the smallest being 355 m2 (3,820 sq ft) and the largest being 700 m2 (7,500 sq ft). A 3,030 m2 (32,600 sq ft) six-screen cinema will be the anchor tenant of the Boardwalk and was initially thought to rival the nearby 14-screen ODEON Multiplex Cinema in Liverpool One, although it has now been confirmed that this will also be an Odeon. Savills and CB Richard Ellis are the leisure and retail agents for the Boardwalk at Central Village. A large plaza within the Boardwalk area will contain water features and seating. Besides the Boardwalk, there are two more retail sectors within Central Village. The Central Shopping Centre which already exists as part of the entrance to Central Station will be completely redeveloped with Sainsbury's and Superdrug being two of the larger stores. The single largest retail aspect of the Central Village scheme is the redevelopment of the 39,000 m2 (420,000 sq ft) nine-storey Lewis's building, see #Lewis's redevelopment. Central Village will back on to Bold Street, one of the main shopping streets in the city.

Although not the largest in Liverpool city centre, Central Station proved the busiest in the 2008/2009 period when close to 20 million passengers passed through the station in the space of a year. In December 2007, Bart Schmeink, Merseyrail's then managing director, pledged a major overhaul of Liverpool's Loop Line underground stations. As it stands the redevelopment of Central Station is now one of the most important aspects of the Central Village scheme. In 2009 the station was identified as one of the ten worst category B interchange stations for mystery shopper assessment of fabric and environment, and is set to receive a share of £50m funding for improvements. Alongside the surface level redevelopment of Central Station (which connects it directly to the main Central Village plaza via escalators), on 23 April 2012 Liverpool Central closed its doors to passengers to undergo a major refurbishment and makeover of the station at a cost of £20m which was fully completed in October 2012.

Central Station Towers 1 and 2 are the most ambitious aspect of the Central Village development. Located directly above retail space in Boardwalk building, the towers are the only residential part of Central Village. The towers were designed by architect firm Woods Bagot and are being developed by Central Regeneration Ltd. The tallest of the two apartment buildings will stand 76 metres (249 ft) tall and consist of 25 storeys, whilst the other tower will contain 20 storeys and be 61 metres (200 ft) tall. Upon completion, both buildings will rank amongst the twenty tallest in Liverpool. There were originally plans for a combined total of 320 apartments, however it has since been reduced to 214 in favour of more leisure facilities.

In January 2009 hoteliers Millennium & Copthorne announced that they would be opening two hotels in Central Village (a hotel chain that is primarily aimed at corporate guests and leisure customers). The three or four-star Copthorne Hotel Liverpool will face onto Newington Square, whilst the four or five-star de luxe Millennium Hotel will be created in the refurbished Grade II listed Watson Building near the Lewis's building. The Copthorne will house some 174 hotel rooms, and the Millennium will be the largest of the two with 240 rooms. They will also boast meeting and conference facilities, bars, restaurants and a gym. The Copthorne Hotel Liverpool and Millennium Hotel Liverpool are estimated to cost around £50 million (which is around 30% of the overall Central Village development's cost) and are scheduled to be constructed between 2011 and 2012. This plan did not come to fruition and with problems with the developer the hotel chain pulled out of the development to be replaced with a proposed Moxy Hotel (Marriott and Ikea). More detailed plans of this hotel are expected in 2015. Cancellation of plans for a Moxy Hotel on Cropper Street is confirmed. The site now has no plans for development until an interested party steps forward. No work on this site is likely until all other elements of Central Village are complete in about 13 years' time.

The 39,000 m2 (420,000 sq ft) nine-storey Lewis's building, which was Liverpool's most famous store for 154 years, closed its doors for the last time on 29 May 2010 and will be redeveloped as part of the Central Village project. Lewis's is the only currently standing building that will house retail outlets of Central Village in the near future. Close to 17,000 m2 (180,000 sq ft) of retail and leisure space will be spread across five floors (basement level, lower ground floor, ground floor, plaza level and upper plaza level). There will be 26 units with an average floor space of 620 m2 (6,700 sq ft) (although the largest unit covers 2,240 m2 (24,100 sq ft)). This will bring the total retail and leisure space in Central Village to around 24,000 m2 (260,000 sq ft), effectively making it the third largest shopping centre in Liverpool city centre behind only Liverpool One and St. John's Shopping Centre. Large amounts of office space and a 125-room Adagio hotel will occupy the remaining floors.

All content from Kiddle encyclopedia articles (including the article images and facts) can be freely used under Attribution-ShareAlike license, unless stated otherwise. Cite this article:
Central Village, Liverpool Facts for Kids. Kiddle Encyclopedia.