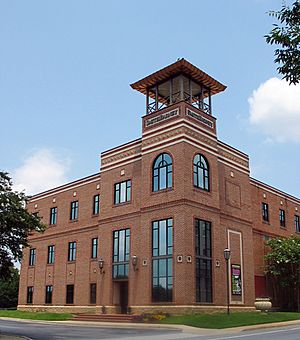 The Citi-Smith-Barney building where Centre Stage has been located since 1997.

Centre Stage is a year-round, 285-seat theater in downtown Greenville, South Carolina. The theater maintains a full-time staff of seven and produces between six and eight mainstage productions each year, in addition to a wide variety of other entertainment and nightlife activities. Actors, directors and other theater artists are hired both locally and regionally on an as-needed basis. Centre Stage is a constituent member of Theatre Communications Group (TCG) and a member of the professional division of the Southeastern Theatre Conference (SETC).

Founded in 1983 by Douglas P. McCoy, Centre Stage was formed with the intent of becoming a professional theater. The theater's first performance space was inside the Greenville County Museum of Art and its first full production was presented in the St. Mary's Church gymnatorium. For the next four years, Centre Stage performed in the Greenville School District's Fine Arts Center. For the next ten years Centre Stage leased a building on the corner of Washington and Academy Streets and produced all of its plays there.

The Centre Stage New Play Festival (NPF) receives hundreds of scripts throughout the year submitted by playwrights from around the country and abroad. Four finalists are chosen to be presented in readers’ theater format during each year’s festival. Talkback sessions for the four festival finalists take place immediately following the readings, making the festival an opportunity for playgoers to participate in the creative process that culminates in a full production of the play chosen as festival winner. Previous NPF winners include The Edith Whartons by Erwin Palley (winner 2005 NPF, produced 2006), Guided Tour by Peter Snoad (winner 2006 NPF, produced 2007) and The Uncurled Hand by Stephen Kilduff (winner 2007 NPF, produced 2008), "The Legacy" by Adam Siegel (winner 2008 NPF, produced 2009), "Coal Creek" by Walter Thinnes (winner 2009 NPF, produced 2010). Each year's festival features a keynote playwright of national stature, such as Lee Blessing and Arlene Hutton.

All content from Kiddle encyclopedia articles (including the article images and facts) can be freely used under Attribution-ShareAlike license, unless stated otherwise. Cite this article:
Centre Stage (theater) Facts for Kids. Kiddle Encyclopedia.