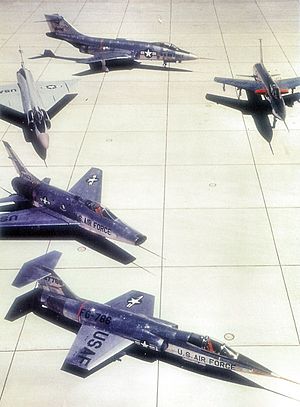 Century Series is the nickname of a group of fighter aircraft built in USA for the Cold War. It was all aircraft with number 100 in the code.

The Century Series is a popular name for a group of US fighter aircraft representing models designated between F-100 and F-106 which went into full production. They included the first successful supersonic designs in the United States Air Force's service, which remained in active service well into the 1970s and 1980s with the Air Force Reserve and Air National Guard. Three later variants, the QF-100, QF-102 and QF-106 also continued in drone service, primarily as aerial targets, until the late 1990s.

The name "Century Series" stems from the fighter (F-) designation number being in the 100-109 range. The term became popular to refer to a group of generally similar designs of the 1950s and early 1960s.

As it evolved, the attribution of the Century Series moniker reflects models designated between F-100 and F-106 which went into full production: 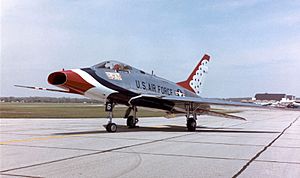 All content from Kiddle encyclopedia articles (including the article images and facts) can be freely used under Attribution-ShareAlike license, unless stated otherwise. Cite this article:
Century Series Facts for Kids. Kiddle Encyclopedia.