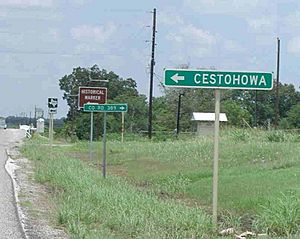 Cestohowa (named after the Polish city of Częstochowa) is an unincorporated community in Karnes County, Texas, United States. According to the Handbook of Texas, the community had an estimated population of 110 in 2000.

The community's history is closely tied to the settlement of Panna Maria, five miles to the south. It was from Panna Maria, the oldest Polish settlement in the United States, that forty Silesian families established Cestohowa in 1873. The new settlement's name originated from the city in Poland that was home to the painting of Our Lady of Częstochowa, a Roman Catholic patroness.

A church was built in 1877–78. Cestohowa had its own post office between 1883 and 1918, and a public school that opened (by incorporating a parochial school) in 1937 and operated through the 1970s. Today there are approximately 110 residents living in the community.

Public education in the community of Cestohowa is provided by the Falls City Independent School District.

All content from Kiddle encyclopedia articles (including the article images and facts) can be freely used under Attribution-ShareAlike license, unless stated otherwise. Cite this article:
Cestohowa, Texas Facts for Kids. Kiddle Encyclopedia.