The ruins of the Chailey Heritage Marine Hospital stand to the seaward side of Tide Mills, east of Newhaven, Sussex, in England. 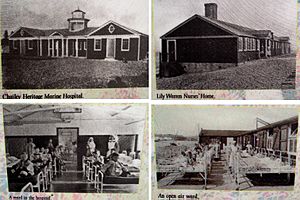 The War Office regarded the area as a potential invasion site and considered that the buildings might provide cover for invading German forces; the hospital was therefore demolished in 1940 during the Second World War

All content from Kiddle encyclopedia articles (including the article images and facts) can be freely used under Attribution-ShareAlike license, unless stated otherwise. Cite this article:
Chailey Heritage Marine Hospital Facts for Kids. Kiddle Encyclopedia.