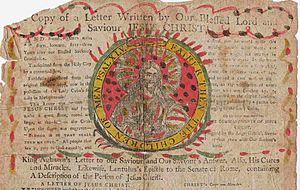 Top portion of an 18th century "Letter from Heaven," produced in England. 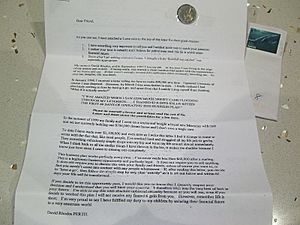 Printed Australian chain letter from 2006, with a five-cent coin taped to it as what it calls a "financial eye-catcher"

A typical chain letter consists of a message that attempts to convince the recipient to make a number of copies of the letter and then pass them on to as many recipients as possible. In reality, the "chain" is actually a geometrically progressing pyramid that cannot be sustained indefinitely. Common methods used in chain letters include emotionally manipulative stories, get-rich-quick pyramid schemes, and the exploitation of superstition to threaten the recipient with bad luck or even physical violence or death if he or she "breaks the chain" and refuses to adhere to the conditions set out in the letter. Chain letters started as actual letters that one received in the mail. Today, chain letters are generally no longer actual letters. They are sent through email messages, postings on social network sites, and text messages.

There are two main types of chain letters:

In the United States, chain letters that request money or other items of value and promise a substantial return to the participants (such as the infamous Make Money Fast scheme) are illegal.

All content from Kiddle encyclopedia articles (including the article images and facts) can be freely used under Attribution-ShareAlike license, unless stated otherwise. Cite this article:
Chain letter Facts for Kids. Kiddle Encyclopedia.