Chai Nat (Thai: ชัยนาท) is one of the central provinces of Thailand.

Chai Nat is a flat plain. It is in central Thailand's Chao Phraya River valley. There is a dam. It is used for flood control as well. It also is used to divert water into the country's largest irrigation system. The water is used for irrigation of rice paddies in the lower river valley. The dam was finished in 1957 and was the first dam constructed in Thailand.

Chai Nat was first established during the Ayutthaya kingdom. It was used as a successful base of operations for confronting the Burmese army. As the Burmese were defeated every time, the area earned the name Chai Nat, "place of victory". 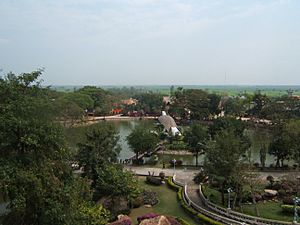 Chai Nat Bird Park (สวนนกชัยนาท) This sanctuary has the biggest bird sanctuary in Asia (26 rai; 4.2 hectares). Many bird bird species to live in their natural habitat.

Wasan Crocodile Farm (ฟาร์มจระเข้วสันต์) There are different kinds of animals such as crocodiles, tigers, rays, and various bird species. 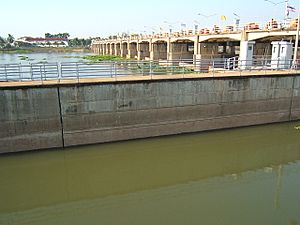 Khun San Statue (อนุสาวรีย์ขุนสรรค์) Khun San or Hero of the Noi River is one of the Bang Rachan folk leaders who fought courageously seven times against the Burmese.

Wat Phra Mahathat (วัดพระมหาธาตุ) The royal temple of Mueang Phraek or Mueang San. The temple houses a distinguished prang with a fluted spire like the shape of a star fruit. The prang housing Buddha relics is made from brick on a square shaped base (a plinth) in the Lop Buri style.

Wat Song Phi Nong (วัดสองพี่น้อง) Legend has it that Chao Sam, one of the three siblings, incited the other two siblings named Chao Ai and Chao Yi against each other for the throne. Both Chao Ai and Chao Yi died and Chao Sam became the ruler. Chao Sam then built one prang and one chedi for his late brothers.

Wat Phra Kaeo (วัดพระแก้ว) An ancient temple housing a beautiful square-based stupa. In front of the stupa stands a Buddha image hall known as Wihan Luangpho Chai, where a delicately carved sandstone lintel was found at the back of the image.

Monkey Park (สวนลิง) The temple houses rubber plantations and is home to a number of monkeys.

Wat Klai Kangwon (วัดไกลกังวล) or Khao Saraphat Si Charoen Tham (เขาสารพัดศรีเจริญธรรม) On top of the hill sees ruins of an ordination hall and the Buddha's footprints, as well as, a panoramic view of the area.

Benjarong Pentachrome Ceramics (เครื่องเบญจรงค์) These five-coloured ceramics are made in the finest and most sophisticated craftsmanship.

Manorom's Pomelo (ส้มโอมโนรมย์) The most famous is the Khao Taengkwa variety with its sweet-crispy taste, large size, and is available throughout. The annual fair is held in August.

Water Hyacinth Woven Product (ผลิตภัณฑ์ผักตบชวา) By making good use of this local plant, water hyacinths are made into a variety of affordable and delicate handicraft products and household decorations such as bags, baskets, slippers, flower pots, trays in the shape of a chicken, and vases

Artificial Flowers and Trees These are made from various materials such as plastic or sa paper.

Hand-woven Textiles Utilizing their spare time from cultivation, local housewives produce the uniquely traditional hand-woven textile such as the tube skirt or pha sin with the decorative piece woven in discontinuous supplementary weft technique known as tin chok, which is the influence of Laotian ancestors, who previously migrated to Chainat. 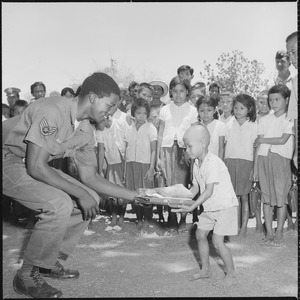 All content from Kiddle encyclopedia articles (including the article images and facts) can be freely used under Attribution-ShareAlike license, unless stated otherwise. Cite this article:
Chainat Province Facts for Kids. Kiddle Encyclopedia.