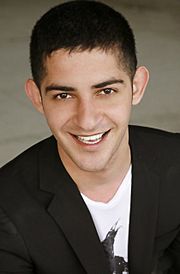 Chaker Khazaal (born 28 September 1987) is a Palestinian-Canadian author and reporter. He was named Esquire Man of the Year in 2015, and has been ranked number 1 in the 100 Most Influential Arabs Under 40 by Arabian Business Magazine.

Chaker Khazaal was born in Beirut, Lebanon, as third generation Palestinian refugee. In 2005, he was awarded the Global Leader of Tomorrow Award by York University in Toronto, Canada. In 2013, Chaker Khazaal published his first novel titled Confessions of a War Child. He then released the second installment, subtitled Lia, in 2014. The last part of the trilogy, subtitled Sahara, was published in 2015.

Chaker writes in the Huffington Post about various topics, mainly related to the Middle East and refugees.

He has spoken about refugees on mainstream media, and dedicated his Esquire Man of the Year Award to Aylan Kurdi, the Syrian child who was found dead on a beach in Turkey.

All content from Kiddle encyclopedia articles (including the article images and facts) can be freely used under Attribution-ShareAlike license, unless stated otherwise. Cite this article:
Chaker Khazaal Facts for Kids. Kiddle Encyclopedia.