The Indian chameleon (Chamaeleo zeylanicus) is a species of chameleon found in Sri Lanka, India, and other parts of South Asia. Like other chameleons, this species has a long tongue, feet that are shaped into bifid claspers, a prehensile tail, independent eye movement, and the ability to change skin colour. They move slowly with a bobbing or swaying movement and are usually arboreal. Strangely, they do not choose the background colour and may not even be able to perceive colour differences. They are usually in shades of green or brown or with bands. They can change colour rapidly and the primary purpose of colour change is for communication with other chameleons and for controlling body temperature by changing to dark colours to absorb heat.

They are found in India, south of the Ganges River and Chainnsa Type locality: Sri Lanka, restricted by Mertens in 1969. 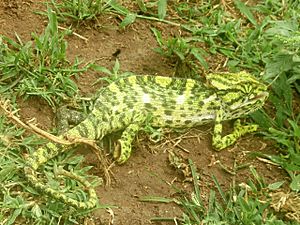 The head has a bony casque, ornamented with crests or tubercles. A separation between the eyes, the interorbital septum, is present. Its dentition is acrodont; the teeth are compressed, triangular, and more or less distinctly tricuspid. The palate is toothless. The eyes are large, covered by a thick, granular lids pierced with a small central opening for the pupil. No tympanum or external ear is present. The body is compressed, and the neck is very short. The vertebrae are procoelian; abdominal ribs are present. The limbs are long, raising the body. The digits are arranged in bundles of two and three; in the hand, the inner bundle is formed of three, the outer of two digits; it is the reverse in the foot. The tail is prehensile. The head and body are covered with granules or tubercles. The casque equals or nearly equals the distance between the end of the snout and the hinder extremity of the mandible; no rostral appendages occur; a strong lateral crest, not reaching the end of the parietal crest, is present; an indication of a dermal occipital lobe is found on each side, not reaching the parietal crest. No enlarged tubercles occur on the body; a feebly serrated dorsal crest is present; a series of conical tubercles form a very distinct crest along the throat and belly. Males have a tarsal process or spur, the tail is longer than head and body. The gular-ventral crest and the commissure of the mouth are white.

All content from Kiddle encyclopedia articles (including the article images and facts) can be freely used under Attribution-ShareAlike license, unless stated otherwise. Cite this article:
Chamaeleo zeylanicus Facts for Kids. Kiddle Encyclopedia.