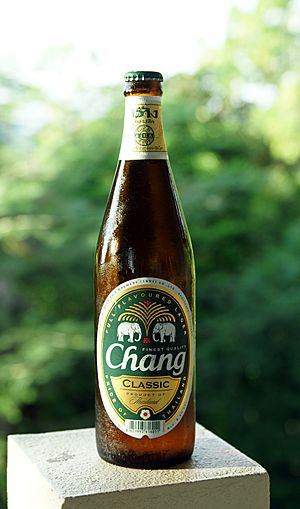 Chang Beer is a beer brand from Thailand. They are one of the biggest alcohol producers in South East Asia. They sponsor Everton Football Club.

ThaiBev brews Chang (or Chang Beer) (Thai: เบียร์ช้าง), a pale lager. Chang (Thai: ช้าง) is the Thai word for elephant, an animal with cultural and historical significance in Thailand. The logo features two elephants facing each other.

Molasses is the main raw material used for the production of ThaiBev's spirits, so that most of the products fall under the category of rum. Molasses is a by-product of the manufacture of raw sugar from sugar cane. As is the case with all distilled spirits, the distillate is crystal clear when first distilled. Amber and dark brown spirits obtain their colour from the extracts from the oak barrel during aging and from caramel, a natural colouring agent.

ThaiBev's yeast cultures, used for fermentation, are grown in its own laboratory and propagated in a yeast propagation tank. The yeast, molasses diluted by water, steamed rice that has been sprayed with mould (to create sugar) and incubated for four days, and water are added into a fermenter and the mixture is allowed to ferment for approximately 72 hours. The liquid that is left at the end of the fermentation process is known as fermented mash.

Distillation takes place in a distilling column and a pot still, which is a large copper or stainless steel kettle. Distilling involves boiling the "fermented mash" and condensing its vapour. The spent sludge remaining in the pot still is removed to be processed. The company's white spirits are then diluted with demineralized water to the desired alcohol content in a white spirits blending tank and sent to be packaged and bottled after filtering. 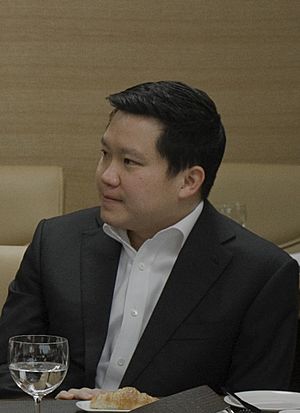 In 2004 Chang became the sponsor of Everton Football Club of the English Premier League. Together, they initiated five projects in the aftermath of the tsunami disaster in Thailand.

Everton-Chang is a village on the Khao Lak coast in Phang Nga Province of Thailand. It consists of 50 houses and a football field. It was built following the 2004 tsunami that struck the area and destroyed the existing village of Ban Naan Khem. Local youth teams compete for the Chang-Everton cup. Officials from Everton F.C. and Chang Beer have been involved in the project. Together, they sponsor Chang Everton Football Cup and send promising Thai footballers to Liverpool for a trial with Everton.

All content from Kiddle encyclopedia articles (including the article images and facts) can be freely used under Attribution-ShareAlike license, unless stated otherwise. Cite this article:
Chang Beer Facts for Kids. Kiddle Encyclopedia.