Changewater is located on the Musconetcong River 2.3 miles (3.7 km) southeast of Washington. The community was named for its location at the confluence of the upper and lower branches of the river. 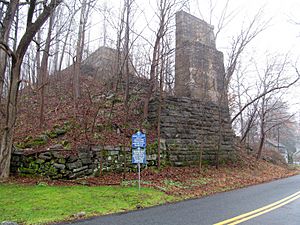 Remains of a trestle constructed by the Warren Railroad across the Musconetcong River at Changewater in 1856, part of the Delaware, Lackawanna and Western Railroad. A station was built nearby. Passenger service ended in 1926, and freight service stopped in 1958. The trestle was removed in 1959.

One of the early iron furnaces in the county—known as the Changewater Forge—was established here in the mid-1700s by Mark Thomson.

During the 1800s, a number of industries were attempted in Changewater, including a tannery, woolen factory, flouring mill, picture frame factory, snuff factory, and distillery.

In 1874, the village consisted of a looking glass and picture framing factory, a store and post office, a grist mill, and eight residences.

By 1918, Changewater had a population of 200, and the A. T. Skerry woolen mill was its only industry.

All content from Kiddle encyclopedia articles (including the article images and facts) can be freely used under Attribution-ShareAlike license, unless stated otherwise. Cite this article:
Changewater, New Jersey Facts for Kids. Kiddle Encyclopedia.