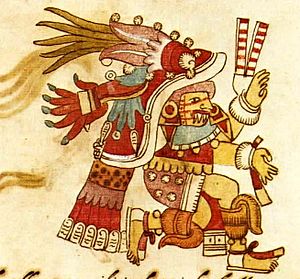 Chantico was the Aztec goddess of both pain and pleasure. She is also the goddess of the family hearth, the home and volcanoes. According to Aztec myths she brings wealth and stability to the home. Chantico protects the home from thieves and losing things. She is sometimes shown wearing a crown of cactus spikes and red snakes. She is the 'Lady of the chili pepper' and is sometimes shown with one or two pods of red chilies.

The meaning of her name is 'in the house', meaning she lives in the house. According to one myth she was changed into a dog and another name for her was Quaxolotl.

All content from Kiddle encyclopedia articles (including the article images and facts) can be freely used under Attribution-ShareAlike license, unless stated otherwise. Cite this article:
Chantico Facts for Kids. Kiddle Encyclopedia.