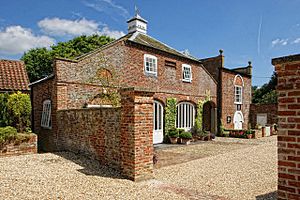 The chapel was built in brick over an existing stable in 1779 by Robert Carr Brackenbury, the well-to-do Methodist minister who built and lived at Raithby Hall and was dedicated by John Wesley on 5 July 1779. The building housing the stable and the chapel is Grade I listed.

John Wesley is recorded as having delivered a service here on 3 July 1788.

The chapel is now part of the Mid-Lincolnshire Methodist Circuit. Occasional services are still held at the chapel.

All content from Kiddle encyclopedia articles (including the article images and facts) can be freely used under Attribution-ShareAlike license, unless stated otherwise. Cite this article:
Chapel at Raithby Hall Facts for Kids. Kiddle Encyclopedia.