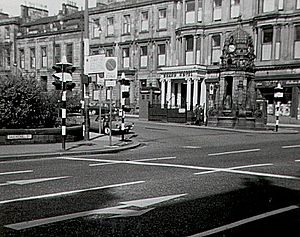 Charing Cross, Glasgow in 1966, featuring the Cameron Memorial Fountain and the Grand Hotel, which was later demolished to make way for the M8 motorway. 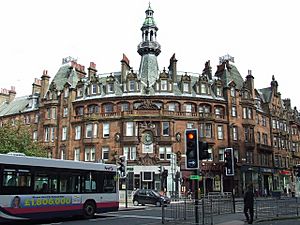 Charing Cross is a major road junction in the Scottish city of Glasgow. It is situated north of the River Clyde at the intersection of Sauchiehall Street, St George's Road, Woodlands Road, North Street and Newton Street, as well as being at a major interchange of the M8 motorway. Formerly the gateway from the shopping area of Sauchiehall Street to the more prosperous Woodlands area, its architectural qualities were largely razed by the building of the motorway. It still marks the boundary between the City Centre and the West End of the City. Nearby landmarks include the Mitchell Library. 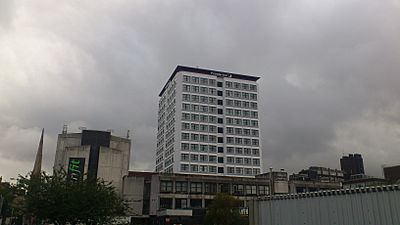 Many office buildings were constructed in Charing Cross in the 1970s, such as Elmbank Gardens, shown here

All content from Kiddle encyclopedia articles (including the article images and facts) can be freely used under Attribution-ShareAlike license, unless stated otherwise. Cite this article:
Charing Cross, Glasgow Facts for Kids. Kiddle Encyclopedia.