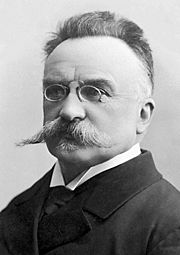 Charles Albert Gobat (May 21, 1843 – March 16, 1914) was a Swiss lawyer, educational administrator, and politician. He jointly received the Nobel Peace Prize with Élie Ducommun in 1902 for their leadership of the Permanent International Peace Bureau.

In 1902, Gobat jointly received the Nobel Peace Prize in 1902 with Élie Ducommun for their leadership of the Permanent International Peace Bureau.

After the death of Élie Ducommun in 1906, Gobat took over the direction of the International Peace Bureau.

Gobat died on March 16, 1914 in Bern, Switzerland from unknown causes, aged 70. He died while attending a meeting of the peace conference at Bern. He stood as if to speak but collapsed, dying about an hour later.

All content from Kiddle encyclopedia articles (including the article images and facts) can be freely used under Attribution-ShareAlike license, unless stated otherwise. Cite this article:
Charles Albert Gobat Facts for Kids. Kiddle Encyclopedia.