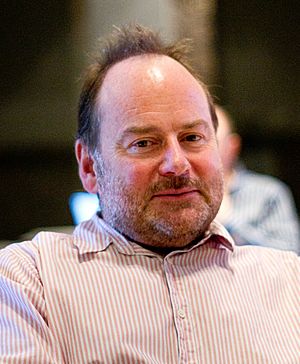 Charles Cecil MBE (born 11 August 1962) is an English video game designer. He has worked in the interactive entertainment industry for 25 years. He is currently the Managing Director for UK based company Revolution Software which has released such critical and commercial hits as Beneath a Steel Sky and the Broken Sword series. Cecil is on the advisory panel of the Edinburgh Interactive Entertainment Festival, and Develop Conference and regularly talks at events and to mainstream press about creative and commercial aspects of the video games industry. He is also a co-founder and director of Game Republic, an alliance of game developers, and is a Board member of Screen Yorkshire, a regional agency that supports movie, television and interactive entertainment in Yorkshire. In 2006, Cecil was awarded the status of ‘industry legend’ by Develop, Europe’s leading development magazine.

All content from Kiddle encyclopedia articles (including the article images and facts) can be freely used under Attribution-ShareAlike license, unless stated otherwise. Cite this article:
Charles Cecil Facts for Kids. Kiddle Encyclopedia.