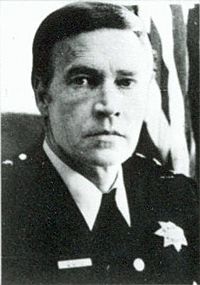 Charles Gain (November 1, 1923 – August 21, 2018) was an American police official. He was born in Hanford, California. He first was police chief for Oakland, California, then as chief in San Francisco in the 1970s.

In 1975, Gain was appointed to run the San Francisco Police Department by Mayor George Moscone and was until 1980.

Gain died from respiratory failure in San Francisco on August 21, 2018 at the age of 94.

All content from Kiddle encyclopedia articles (including the article images and facts) can be freely used under Attribution-ShareAlike license, unless stated otherwise. Cite this article:
Charles Gain Facts for Kids. Kiddle Encyclopedia.