The Charles T. Mitchell House is a private house located at 118 North Shelby Street in Cadillac, Michigan, USA. It was designated a Michigan State Historic Site in 1987 and listed on the National Register of Historic Places in 1986. 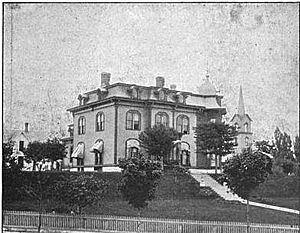 George A. Mitchell, a brother to Congressman William Mitchell of Indiana, arrived in the Cadillac area in 1869, exploring the proposed route of the Grand Rapids and Indiana Railroad. Mitchell was particularly interested in the area near Clam Lake (now Lake Cadillac). In 1871, Mitchell returned to the area and platted a village on the shore of the lake, and by January 1872 the village already had 300 inhabitants. Mitchell was able to induce many influential businessmen and lumbermen to settle in his new community, including his nephew William W. Mitchell.

In 1874, George Mitchell built this house in the Second Empire style, including ornate carved woodwork inside and a mansard roof outside. Mitchell lived here until 1878, when his business partner, Wellington W. Cummer, purchased it. Cummer lived in the house until 1922.

In 1922, Charles T. Mitchell purchased the house built by his uncle George from Wellington W. Cummer. In 1926, Mitchell completely renovated he house to reflect the then-current Prairie School trend in architecture. The house was clad with red brick, most of the ornamentation was removed, and the mansard roof was replaced with a low hip roof.

All content from Kiddle encyclopedia articles (including the article images and facts) can be freely used under Attribution-ShareAlike license, unless stated otherwise. Cite this article:
Charles T. Mitchell House Facts for Kids. Kiddle Encyclopedia.