The Charlie Lake Cave (Tse'KWa) is an archaeological site in the Canadian province of British Columbia. Its Borden System designation is HbRf 39. In a waste pit in front of the small cave artifacts up to 10,500 years old have been found, which are considered to be the oldest evidence of ritual acts in Canada. The cave is located a few kilometers north of Fort St. John, near Charlie Lake.

No artifacts were found in the cave itself, which measures is 45 m × 6 m (148 ft × 20 ft), but in a kind of waste pit in front of the cave entrance, they go back up to 11,000 years, including a fluted point, six retouched flakes and a small bone bead. These findings provide evidence of the northward migration of hunters and bison, in addition, found two buried ravens, which are the oldest traces of rituals in Canada. 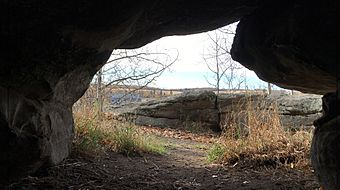 View looking from the interior of the Charlie Lake Cave looking out.

Knut R. Fladmark examined the archaeological site for the first time in 1974 and returned in 1983. Excavation areas were opened found paleo-Indian stone tools and animal bones remains. The excavation layers were found to be intact and it soon turned out that the oldest layer is representative of the historic megafauna. This first excavation revealed five layers.

All content from Kiddle encyclopedia articles (including the article images and facts) can be freely used under Attribution-ShareAlike license, unless stated otherwise. Cite this article:
Charlie Lake Cave Facts for Kids. Kiddle Encyclopedia.