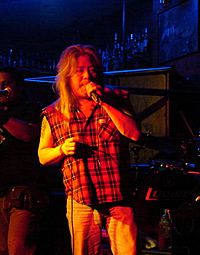 Carlos César Sánchez Hernández (November 6, 1961 – May 28, 2020), known professionally as Charlie Monttana, was a Mexican rock urbano musician and singer-songwriter. He was born in Mexico City.

Sánchez began his career as a singer in Mexico City's rock urbano scene in the 1980s. After that invited by Rodolfo León "León Vago" he joined Vago. In 1987 he was invited by musician Toshiro Midori to be the vocalist of Mara. In 1989 he separated from Mara.

In 1992 Monttana launched his solo career releasing hits such as "Vaquero Rocanrolero" (Rock And Roll Cowboy), "Por Qué El Amor Apesta" ("Why Love Stinks") and "Mi Terrible Soledad" ("My Terrible Loneliness"), among others. He was also a philanthropist.

All content from Kiddle encyclopedia articles (including the article images and facts) can be freely used under Attribution-ShareAlike license, unless stated otherwise. Cite this article:
Charlie Monttana Facts for Kids. Kiddle Encyclopedia.