The Chartered Insurance Institute (also known as the CII) is a professional body for the insurance sector. The CII's purpose, as set out in its 1912 royal charter, is to 'Secure and justify the confidence of the public' in its members and the insurance sector as a whole. It aims to do this through setting standards of integrity, technical competence and business capability.

In February 2016 Sian Fisher joined the Chartered Insurance Institute as CEO, taking over Sandy Scott's 16-year tenure. In November 2016, she launched a Strategic Manifesto outlining a 5-year plan, the foundation of which remains to fulfil the Charter's purpose of building trust in insurance and its practice. The change programme is driven by four key core strategic themes

The second local institute to be formed was the Insurance and Actuarial Society of Glasgow founded in 1881, which held education as its main focus. Following that the institutes of Ireland (in Dublin, 1885), Norwich (1886), Birmingham (1887), Yorkshire (in Leeds, 1888), Bristol (1890), Newcastle upon Tyne (1896) and Nottingham (1896), were formed, though with varying names, e.g. Insurance Social and Musical Society of Bristol.

There was a growing interest in the idea of a central institute which would bolster the work and profile of the existing institutes, and so in March 1897 a conference of representatives from the 10 institutes was held in Manchester, and it was decided that they should form an association called The Federation of Insurance Institutes of Great Britain and Ireland. At this conference it was also proposed that an annual journal of papers on insurance should be produced, that the institutes should jointly offer examinations and certificates, and that an insurance clerks’ orphanage should be established.

Initially, the responsibility for the Journal was assumed by the Birmingham and Glasgow institutes, while the Yorkshire institute and the Manchester association prepared the educational programme, proposing that the Federation should act only as an examining body while local institutes undertook the teaching. The Insurance Clerks’ Orphanage was established as an independent organisation in 1902, operating out of the offices of the London Salvage Corps.

The Royal Charter incorporating the Chartered Insurance Institute was granted on 17 January 1912 by His Majesty King George the Fifth. Each royal charter that is granted is unique in format and content as it is drawn up and contains the Bye-laws deemed relevant by the body to be incorporated. A new Supplemental Charter, replacing all former versions of the Charter, was granted by Queen Elizabeth the Second on 27 January 1987.

Article 3 of the CII's current Charter identifies the six "objects and purposes for which the Institute is constituted":

As a chartered body, the Chartered Insurance Institute has the right to grant specific chartered titles. CII members must first request the grant for a new title at a general meeting of the membership. This is followed by a petition to the Privy Council. If the Privy Council deem the petition agreeable, a minister signs an order allowing the CII to incorporate the right to grant and award the new title. The change is then duly inserted into the Institute's Bye-laws.

The CII has five chartered titles which may be conferred upon individuals in the profession depending upon their specialisation:

In addition, there are three Chartered titles to cover different specialisations for organisations in the insurance and financial advice profession: 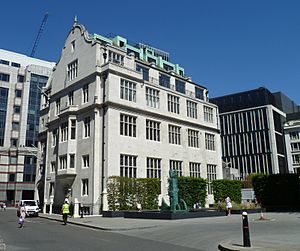 The Insurance Hall is the headquarters of the CII, located at 20 Aldermanbury in the City of London. The building was proposed by Sir Frederick William Pascoe Rutter (the 1910-11 President) in a speech delivered in 1919 entitled The CII: Its right to work, in which he proposed that the CII should have its own building in London to act as a designated meeting place for members and to house a library to facilitate study. The purchase of the freehold on the land and the construction of the building was funded through donations amassed between 1919 and 1932, and debentures issued to insurance companies. The Insurance Hall was opened by King George V on 28 June 1934.

The Insurance Hall is a Grade-II listed building in a Tudorbethan style with stained glass windows bearing the names and emblems of insurance companies that subscribed to the CII, and finished internally with wood panelling. The building initially contained a 480-seat conference hall, a council chamber, a library, a museum, a common-room and writing room for members, 4 classrooms and offices occupied by the CII staff, the Insurance Institute of London, the Life Office's Association, the Insurance Charities and the Insurance Official's Society.

The Insurance Hall was one of few buildings in the area left standing after the bombardment of 29th-30th December 1940, in part due to the efforts of the house steward, Gordon Edward Stewart, who remained in the building to put out fires during the raid. Following the raid, the CII hosted the events of the Chartered Institute of Secretaries and the Institute of Actuaries as their halls had been destroyed.

In 1964 the adjoining land at 21 Aldermanbury was developed into a 5-storey extension to the Insurance Hall to provide more office space for the CII. In 1986, after a period of refurbishment that redeveloped the conference hall and lower ground floor into a banqueting suite, the Insurance Hall was reopened by the Lord Mayor of London. 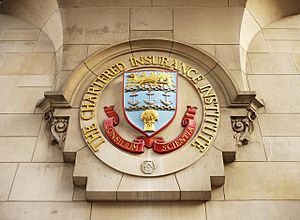 The coat of arms of the Chartered Insurance Institute

The coat of arms of the Chartered Insurance Institute was granted on 25 September 1933. It is composed of a blue shield displaying symbols representing the four original classes of insurance:

The coat of arms was installed on the façade of the Insurance Hall on its opening in 1934. It was subsequently matriculated in Scotland. Two Scottish Local Institutes obtained the grant of differenced versions, incorporating a castle in Edinburgh and a lamb in Perth.

The full display of heraldic attributes, known as achievement, was granted in 1957 to mark the CII's Diamond Jubilee. The additional elements are:

A representation of the full achievement of armorial bearings was installed on the rear façade of the building.

At the time that the Institute was granted a Royal Charter in 1912, full membership was only open to "men working in insurance." Following the First World War, in 1919, the ban on women sitting exams was lifted. A year later, 25 women entered the Institute. In 1921, the first woman achieved Fellowship. An equal membership fee was introduced in 1966. Until then, apart from diploma holders, women had to pay only a nominal fee to join the "Lady Members Committee". The same year, an alternative cheaper 'lady social membership' was also offered by some local institutes, which was purely for organising and participating in social events.

By comparison, today membership of the CII is open to anyone connected with insurance or financial services, including students intending to join the profession.

There are eight levels of membership:

Every CII member in the UK, the Channel Islands, and the Isle of Man is automatically a member of one of 58 local institutes. There are an additional seven associated institutes in Gibraltar and the Republic of Ireland. Members outside of the UK have the option of membership in one of 70 affiliated global insurance institutes.

A strong desire to form a central Insurance Library in London existed before the Charter incorporation in 1912. The objectives of the then Insurance Institute of Great Britain and Ireland included ‘to encourage the study of all subjects bearing on every branch of insurance, and to form a Library for the use of members’. These objectives were then written into the 1912 Charter as the obligation for the CII to maintain a library of resources related to insurance for the benefit of its members. However, it was not until the opening of the Insurance Hall in 1934 that the Chartered Insurance Institute Library was established. Prior to that date, federated Insurance Institutes maintained insurance libraries across the UK and Ireland.

The Museum has existed since the opening of the Insurance Hall in 1934. It currently occupies a small space on the second floor. It is dedicated to the history of the four main classes of insurance, with a special focus on fire insurance and the history of fire fighting. Early insurance policies and other artefacts from the Chartered Insurance Institute's special collections are on display. The Museum originally exhibited a 19th-century fire brigade engine which is now housed at the American Museum in Bath.

In 1934 the illustrator C. Walter Hodges painted a frieze that surrounds the four walls of the museum area, depicting allegories of marine, fire, accident and life insurance. The Insurance Hall is designated as a Grade II listed building, in part due to these murals.

The CII also exhibits a large collection of over 1,500 fire marks which were bequeathed to the CII by several different donors.

All content from Kiddle encyclopedia articles (including the article images and facts) can be freely used under Attribution-ShareAlike license, unless stated otherwise. Cite this article:
Chartered Insurance Institute Facts for Kids. Kiddle Encyclopedia.