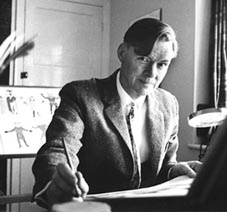 Cyril Walter Hodges (18 March 1909 – 26 November 2004) was an English artist and writer best known for illustrating children's books and for helping to recreate Elizabethan theatre. He won the annual Greenaway Medal for British children's book illustration in 1964.

Cyril Walter Hodges was born in Beckenham, Kent, the son of Cyril Hodges, "a leading figure in advertising and copyrighting". He was educated at Dulwich College, which he recalled as "a wretched imprisonment", and at Goldsmiths' College of Art. Hodges fell in love with Greta Becker, a hopeful ballet dancer, and they married in 1936. She provided "complete domestic support" until she died in 1999.

Hodges spent most of his career as a freelance illustrator. For many years he did line drawings for the Radio Times, as well as the cover of the 1938 Christmas edition. Among the writers for children with whom he collaborated as an illustrator were Ian Serraillier, Rosemary Sutcliff (The Eagle of the Ninth), Rhoda Power (Redcap Runs Away), Elizabeth Goudge (The Little White Horse) and William Mayne.

During a year spent in New York he was encouraged to write, as well as illustrate, Columbus Sails (1939), a work of historical fiction for children. It proved popular on both sides of the Atlantic. Its success eventually led to several others including The Namesake: A Story Of King Alfred and its sequel The Marsh King; Magna Carta; The Norman Conquest; and The Spanish Armada (1964 to 1967). The Namesake was a commended runner up for the annual Carnegie Medal, which recognises the author of the year's best British children's book. 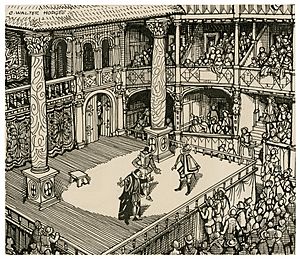 Hodges designed costumes and scenery for the Everyman Theatre, Liverpool (1928–30) and for the Mermaid Theatre and St. George's Hall, London in the 1950s. His love of theatre led to him becoming an authority on the construction of the Globe and other theatres of Shakespeare's time.

From 1935 to 1999 he both wrote and illustrated five books about theatre in that time. He had thirty years experience in theatre practice and scholarship before doing Shakespeare's Theatre for children, published by Oxford University Press in 1964. For that he won the annual Kate Greenaway Medal from the Library Association, recognising the year's best children's book illustration by a British subject. Only one other Greenaway Medal in almost sixty years has been awarded for the illustration of nonfiction. According to one library catalogue summary, Shakespeare's Theatre "[e]xamines how the pagan festivals and religious dramas performed throughout England evolved into the professional theaters, such as the Globe, in London." It also illustrates and describes "Shakespeare's famous and now rebuilt Globe Theatre".

Hodges argued in one of his books that "the theatre as an institution is the pre-eminent arrangement whereby human beings work out the models of their own conduct, their morality and aspiration, their ideas of good and evil, and in general those fantasies about themselves and their fellows which, if persisted in, tend to eventually become facts in real life. If this is so, and it would be hard to deny, then the theatre must be seen as a most powerful instrument in the social history of mankind, and its own history must therefore be allowed a corresponding importance." 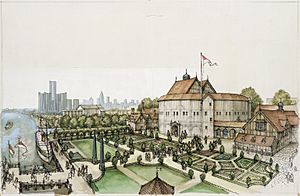 Hodges's Shakespearean expertise led Wayne State University theatre department chair Leonard Leone to invite him to Detroit in the late 1970s and early 1980s to work on Leone's proposed reconstruction of the Globe Theatre on the Detroit River. The city suffered financially after the collapse of the U.S. auto industry and the project fell apart in 1982.

In 1986, Hodges sold his theatrical and Elizabethan drawings (almost 900 items) plus their copyright to the Folger Shakespeare Library. Because the Folger makes its digital image collection available under a Creative Commons Attribution-ShareAlike 4.0 International license, the drawings are now free cultural works.

Books by others illustrated by Hodges

All content from Kiddle encyclopedia articles (including the article images and facts) can be freely used under Attribution-ShareAlike license, unless stated otherwise. Cite this article:
C. Walter Hodges Facts for Kids. Kiddle Encyclopedia.