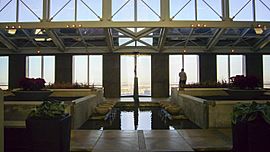 Chase Tower Dallas 40F Sky Lobby in 2007, is no longer open to the public and the planters have been removed since 2018

Chase Tower is a 225 m (738 ft), 55-story postmodern skyscraper at 2200 Ross Avenue in the City Center District of downtown Dallas, Texas. Although it is the fourth tallest skyscraper in the city, if one were to exclude antennas and spires, it would be the third. It is also the 12th tallest building in Texas. The building was designed by Skidmore, Owings & Merrill and was completed in 1987. The building also houses the Dallas Petroleum Club, a business and social club located on the 39th and 40th floors.

This building is known for its unique architecture which includes a curved glass top and a 6-story hole in the center of the building near the top and is nicknamed the "Keyhole Building" by some people.

The Jack Mitchell, Inc., Edsel automobile dealership was located on this building's site in 1957.

When Ion Storm existed, its corporate headquarters were in Suite 4500, 22,000-square-foot (2,000 m2) of space in a penthouse suite on the 54th floor, the top floor, of the tower. Lisa Chadderdon of Fast Company said that the penthouse location was "unusual". For the first ten years after the construction of the JPMorgan Chase Tower, the penthouse location had been unleased.

The company Autonomy etalk planned to move its employees to the Chase Tower from Las Colinas, Irving in 2008.

Deloitte has an office in the tower which had 950 employees in late 2009. In early 2009, Deloitte announced that it planned to consolidate its Downtown operations and its operations in Irving, Texas. Initially, there would have been a multimillion-dollar advantage to Deloitte if it moved to Irving. The City of Dallas proposed an economic grant to Deloitte if it decided to stay in Downtown Dallas. Therefore, Deloitte agreed to extend its lease in the tower for fifteen years, beginning in 2011. Deloitte will have at least 1,111 employees in the JPMorgan Chase Tower.

The rotunda which sits on the property's north plaza was remodeled as a fitness center exclusive to Chase Tower tenants. It includes cardio, free weight and circuit training equipment as well as a studio center for group fitness and spinning class workouts. Men's and women's locker rooms with full shower facilities and day lockers were added in the lower level of the rotunda. Tenants may also opt for an executive locker that provides full-time locker use of a larger locker, changing area and executive lounge. The fitness center is staffed with a full-time manager and day porter Monday through Friday.

The 40th floor Sky Lobby at the base of the "keyhole" contained a little-known observation area which is no longer available to the public.

All content from Kiddle encyclopedia articles (including the article images and facts) can be freely used under Attribution-ShareAlike license, unless stated otherwise. Cite this article:
Chase Tower (Dallas) Facts for Kids. Kiddle Encyclopedia.