Chasing Rainbows is a museum based on the country music singer Dolly Parton. It is located in the Dollywood theme park, Pigeon Forge, Tennessee, United States.

Chasing Rainbows opened in 2002 as a part of the "Adventures in Imagination" area of the Dollywood park. The building was originally built in 1996 and opened as the Silver Screen Cafe and was converted to DJ Platters in 1997. Chasing Rainbows is the second museum for Dolly at Dollywood. The original was Rags to Riches: The Dolly Parton Story, located over a pedestrian tunnel in Craftman's Valley. 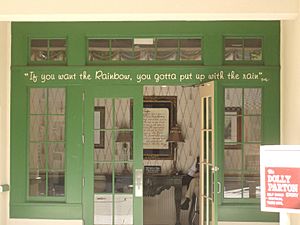 All content from Kiddle encyclopedia articles (including the article images and facts) can be freely used under Attribution-ShareAlike license, unless stated otherwise. Cite this article:
Chasing Rainbows Museum Facts for Kids. Kiddle Encyclopedia.