Chatanika is a small unincorporated community located in the Fairbanks North Star Borough, Alaska, United States, north-northeast of the city of Fairbanks. The community runs along an approximately 20-mile (32 km) stretch of the Steese Highway, the majority of which sees the highway paralleled by the Chatanika River. The community consists of sparsely scattered residential subdivisions, several roadside businesses, a boat launch where the Steese Highway crosses the Chatanika River, relics of past gold mining operations in the area and the Poker Flat Research Range operated by the Geophysical Institute of the University of Alaska Fairbanks.

Chatanika was one of over a dozen small communities in the vicinity of Fairbanks whose prosperity was tied to gold mining during the Fairbanks Gold Rush. Chatanika, as the northern terminus of the narrow-gauge Tanana Valley Railroad, also owed much of its early prosperity to railroad operations, which were closely tied to the mining activity. Chatanika, along with Fox, are the only two of the numerous communities in the hills immediately north of Fairbanks which has managed to remain populated and maintain a distinct community identity.

A mining settlement established about 1904, it received a railroad station when the Tanana Valley Railroad was completed in 1907. The Chatanika post office was established in 1908.

The community was named after the Chatanika River. 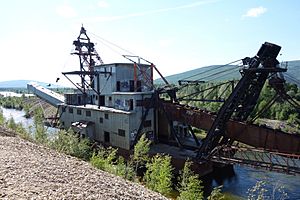 The Chatanika gold dredge is a historic relic of gold dredge #3 owned and operated by F.E. Company between 1928 and 1958. The dredge is located at about 27.5 miles (44.3 km) along the Steese Highway east of Fairbanks in a 60 acres (24 ha) pond it dug itself, directly across the road from the Chatanika Lodge. Today the dredge is private property and off-limits to the public. In August 2013 an accidental fire destroyed the dredge.

All content from Kiddle encyclopedia articles (including the article images and facts) can be freely used under Attribution-ShareAlike license, unless stated otherwise. Cite this article:
Chatanika, Alaska Facts for Kids. Kiddle Encyclopedia.