The Chatham bellbird (Anthornis melanocephala) is an extinct species of bird in the family Meliphagidae. It was endemic to the Chatham Islands. 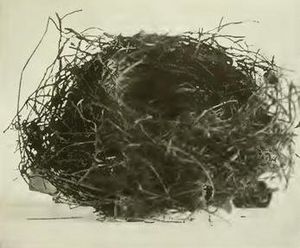 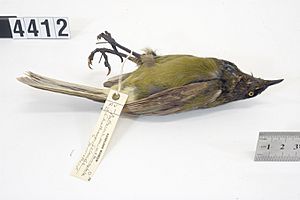 In appearance it was very similar to the New Zealand bellbird (Anthornis melanura) but was considerably larger. Also the whole of the head and neck was brightly glossed in purplish or steel-blue.

It was last observed in 1906 on Little Mangere Island. The population was likely impacted by the introduction of a disease as there was a sudden population decline before the onset of other disturbances such as rats, cats and specimen collectors.

All content from Kiddle encyclopedia articles (including the article images and facts) can be freely used under Attribution-ShareAlike license, unless stated otherwise. Cite this article:
Chatham bellbird Facts for Kids. Kiddle Encyclopedia.