Its natural habitats are temperate forests and temperate grassland.

Chatham snipe feed by probing into the ground in search of worms, amphipods, insects and larvae. 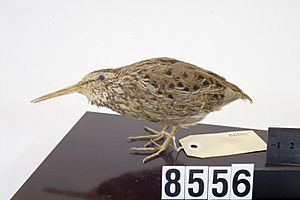 In 1868 the Chatham snipe was collected by naturalist Charles Traill and was sent to ornithologist Walter Buller who described it as a new species of snipe. On an exploratory mission to the islands in 1871, Henry Travers only found the snipe on Mangere Island. Attempts to return snipe to main Chatham Island would be hampered by the presence of introduced mammals and of weka, which are predators of snipe chicks.

All content from Kiddle encyclopedia articles (including the article images and facts) can be freely used under Attribution-ShareAlike license, unless stated otherwise. Cite this article:
Chatham snipe Facts for Kids. Kiddle Encyclopedia.