Chats Falls (in French: Chute des Chats, meaning "Cat Falls") were a set of waterfalls on the Ottawa River, near Fitzroy Harbour, Ontario, and Quyon, Quebec, Canada. A hydroelectric generating station is now located here, owned and operated jointly by Hydro-Québec and Ontario Power Generation. It lies within the cities of Ottawa, Ontario and Pontiac, Quebec. 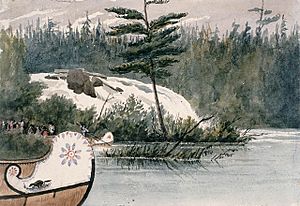 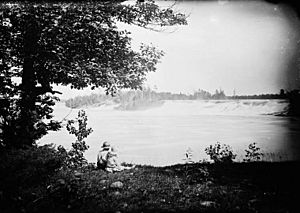 In 1786, a homestead was built on what is known today as Indian Point on the northern end of Pontiac Bay. In 1800 this property was taken over by the XY Company, followed by the North West Company in 1804, and then the Hudson’s Bay Company in 1821, when these two companies merged. The HBC operated a small trading post, which closed in 1837.

In 1847, the Union Rail Road was established at Chats Falls. Passengers were treated to a horse-drawn railroad trip of 5 kilometres (3.1 mi) through the dense forest skirting the rough waters. While the roof sheltered passengers from rain and sun, the sides were open to mosquitoes, which brought complaints from many of the river travelers.

In 1853, James Poole, editor of The Carleton Place Herald, wrote about the Chats Falls horse railway:

"Certainly this is one of the last things you dare to hope for in the heart of the wilderness far away from either a road or a cow-path - and you must almost doubt whether it is a reality, or like the palace of Aladdin, you are not under the mysterious influence of some kind genii for your present position."

Construction on a run-of-river generating station and dam began in 1929 and was completed in 1932, destroying the falls and creating Lac des Chats reservoir behind the dam. The powerhouse is in the middle of the Ottawa River on the Ontario/Quebec border.

On March 2, 1953, a fire started in the morning, burning for 7 hours and destroying 2 generators and the building's roof. The station went completely down when the cables were damaged. Two of the eight generating units were brought back into operation the following day and another four units brought on-line the following week. In all, $2 million in damage was done.

The power station has 8 turbines (4 managed by Ontario Power Generation and 4 managed by Hydro-Québec) with a head of 16.16 meter (53 feet), generating a total of 79 MW.

All content from Kiddle encyclopedia articles (including the article images and facts) can be freely used under Attribution-ShareAlike license, unless stated otherwise. Cite this article:
Chats Falls Facts for Kids. Kiddle Encyclopedia.